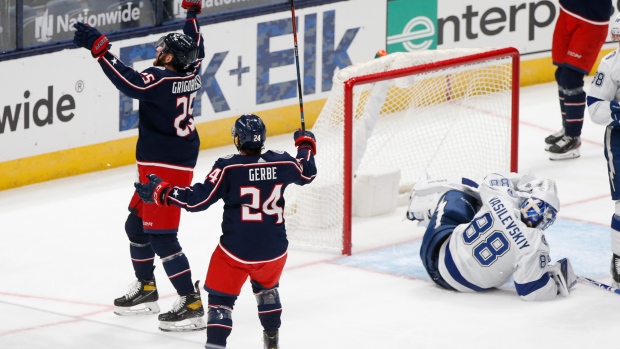 Nick Foligno, Mikhail Grigorenko, Vladislav Gavrikov, Zach Werenski and Eric Robinson scored, and Elvis Merzlikins had 30 saves as the Blue Jackets played their most explosive game of the season.

The Blue Jackets' second victory in six games came shortly after Dubois, one of the team's leading scorers, was sent to Winnipeg in exchange for Patrik Laine and Jack Roslovic in a deal announced early Saturday.

Coach John Tortorella was unhappy with the effort from Dubois — who had asked before the season to be traded — early in Thursday's loss to the Lightning and benched him for the rest of the game.

Foligno said the trade will help everyone move on.

“It just puts the focus back on what matters and that’s winning hockey games,” the Columbus captain said. “I think that’s what I was most frustrated about, that we had an opportunity to play a certain style and act a certain way. I think (Dubois) would be the first one to admit that he didn’t have that mindset that we needed him to have in order to have success coming out the gates.”

Victor Hedman and Ondrej Palat scored for the Lightning, who lost for the first time in their first four games. Andrei Vasilevsky made 22 saves.

“We weren't in sync at all,” Lightning coach Jon Cooper said. “Nobody really gave us much in the game.”

Hedman started it by beating Merzlikins with a back-hander from the slot on a rush 4:10 into the game. The Blue Jackets tied it 17 seconds later when Foligno knocked in a rebound off Vasilevsky's stick. Cam Atkinson did good work fighting off Hedman all the way through the zone to get to the net.

Later in the first, Grigorenko got his first goal as a Blue Jacket when he tapped in a puck from the blue paint that had trickled behind Vasilevsky.

Gavrikov's snap-shot from the slot with 59 seconds left in the first put Columbus up 3-1. The Lightning capitalized quickly on a power play with Palat's tap-in 14 seconds before the break to make it a one-goal game again.

After a scoreless second period, Werenski's shot from the left circle went in for his first goal of the season 6:34 into the third. Robinson added an empty-netter with 1:48 left in the game.

“I just really liked the structure of our team (today),” Tortorella said. We've been a team just lacking that structure in the middle of the ice, in the neutral zone. We focused on it with the video, it's been a part of our meetings prior to the game. I thought we were much more concentrated in that part of the game."

The 22-year-old Dubois, a gifted centre, signed a two-year, $10 million contract days before training camp opened but made it clear he wanted a change of scenery. Columbus general manager Jarmo Kekalainen said the deal with Winnipeg had been in the works for a while and wasn’t hastened by Tortorella benching the player on Thursday.

"(Kekalainen) got put in a hell of a spot," Tortorella said.

GRIGORENKO ON THE SHEET

Grigorenko’s tally was his first in the NHL since April 4, 2017, when he scored for Colorado in a game against Chicago. He played the next three seasons in Russia’s KHL where he totalled 46 goals and 70 assists in 147 games.

“It’s on us,” said Tampa Bay defenceman Mikhail Sergachev. “We were sloppy at times and not focused, myself included. I was sloppy. It was probably the worst game of my career.”

Tampa Bay defenceman Erik Cernak was injured in the first period and didn't return. Center Mitchell Stephens had to be helped off the ice with an apparent leg injury early in the third period. Both were still being evaluated after the game.