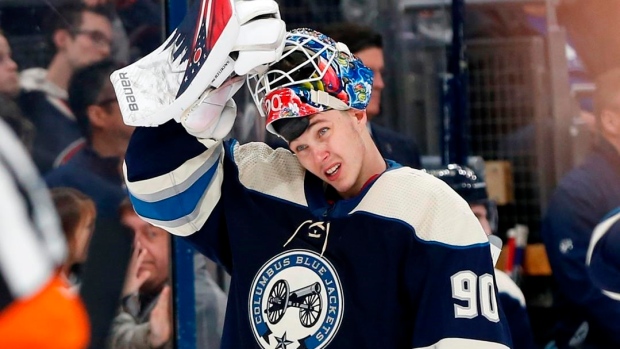 The Athletic's Aaron Portzline reports the team and Nationwide Arena staff are attempting to uncover the identity of the offending party.

Told #CBJ and #Nationwide Arena security are attempting to identify the fan who, according to goaltender Elvis Merzlikins, taunted Merzlikins regarding the off-season death of his friend and former teammate Matiss Kivlenieks before Monday’s game vs. Dallas. #TexasHockey.

Kivlenieks, 24, was killed at the home of Blue Jackets goaltending coach Manny Legace last July 4 during a fireworks malfunction in which the Latvian attempted to shield others from the errant fireworks.

After Monday night's 4-1 victory,  Merzlikins revealed that he was taunted before the game.

"I was expecting a shutout, because I believe in karma," Merzlikins said of his 31-save performance. "There are some stupid people in this world. It was really bad what happened in the tunnel when I was walking out. There was a fan from Dallas who [provoked] me about Matiss. After the first period, the three posts that I got, I really believed in karma. I saw that [Matiss] was really there."

Merzlikins, 27, says he didn't respond to the provocations.