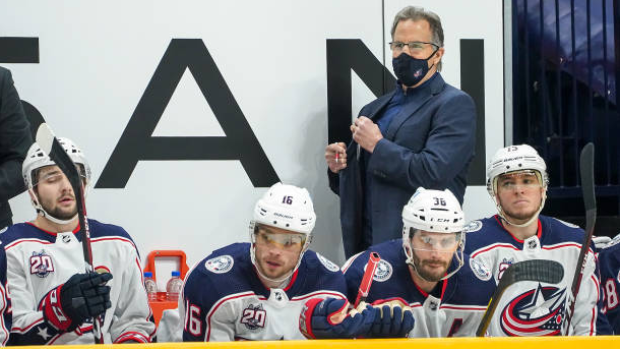 Dubois, who scored what stood to be the game-winning goal in the third period of the Blue Jackets’ 3-2 win, played just one shift in the final seven minutes of the second period.

"You guys are really dissecting this benching and sitting," Tortorella said post-game. "I guess I benched Max [Domi] the other night, you said. Slow down, boys. You'll know when I bench someone. I have to make decisions when the game is being played, when I think someone is going at certain times. But don't try to manifest something as far as the benching. That's all part of a three-period hockey game."

Dubois, who played 18:30 and then 17:24 in the team's opening two games – both loses to the Nashville Predators – said he was not given an explanation for the dip in ice time Monday.

"No, he didn't say anything. It's just stuff that happens. Other guys are playing well," Dubois said.

Selected third overall in the 2016 NHL Draft, Dubois requested a trade from the Blue Jackets after signing a two-year, $10 million contract in the opening days of training camp. He was not in the mood to discuss the request, which Tortorella openly talked about last week, on Monday.

"I have one job and it's to play hockey and help the team. I just have to go out there and try to help [the team] get two points every night. It's a short season, so every game matters even more," he said. "The only thing I can control is how I play. I can't control anything else."

The Blue Jackets will look to even their record when they face the Red Wings again in Detroit on Tuesday night.