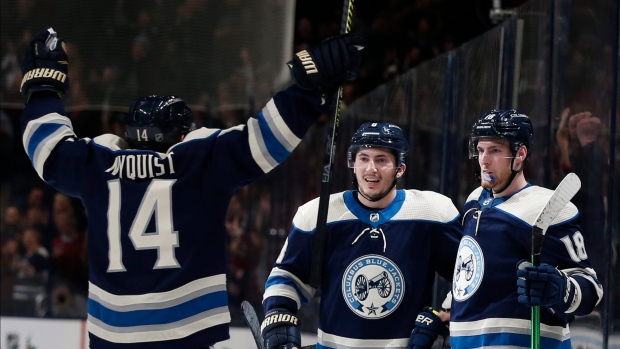 COLUMBUS, Ohio — The Blue Jackets have pulled their goaltender in the closing minutes several times this season, only to see it backfire. But this time, it worked.

Pierre-Luc Dubois scored in overtime, Zach Werenski had a goal and an assist, and Columbus rallied to beat the Los Angeles Kings 3-2 on Thursday night.

With an extra skater on the ice, Boone Jenner scored with 1:43 remaining to force overtime for the Blue Jackets, who won after trailing in the first period for the second time this season. Dubois got the game-winner 1:11 into overtime when he took a tape-to-tape pass from Gustav Nyquist on a 2-on-2 rush.

“A lot of games like that this year we still play well enough to get points but don’t necessarily get it,” Dubois said. “To get that big goal ... really felt good.”

Adrian Kempe and Jeff Carter scored for the Kings, who lost in overtime for the second time in four games. Los Angeles was beaten after leading for two periods for the first time this season.

Joonas Korpisalo stopped 23 shots to earn his 15th win of the season. Jack Campbell made 25 saves for the Kings.

Kempe put Los Angeles in front just 42 seconds into the game, standing firm in front of the net and sending the rebound of Ben Hutton's shot past Korpisalo for his sixth goal of the year and second in his last two games.

"It’s disappointing we were so close and we weren’t able to hold on,” Kings coach Todd McLellan said. “Sometimes it goes your way. Sometimes it doesn’t. We were on the receiving end of the third. We kind of sat back and could have been aggressive. ... We tried to check our way to a win. Sometimes that works, sometimes it doesn’t. Tonight is evidence you have to keep your foot on the gas pedal.”

The Jackets tied it early in the first on a power play. Zack Werenski one-timed Nyquist's pass from above the right circle past Campbell at 2:55. The goal was the seventh of the season and third with a man advantage for the defenceman, playing in his second game since missing seven with a shoulder injury.

Carter got the Kings on the board at 11:16 of the second period when he collected a rebound and scored on a turn-around shot in front of the net.

Korpisalo was on the bench when Jenner tied it, deflecting Werenski's shot from the blue line into the net.

“They are a hard team to play against,” Columbus coach John Tortorella said. “I don’t think we generated a whole bunch. We stayed with it and tried to get it through the neutral zone. They played a tough man-on-man defence. We took it to the end with a goalie pull and the score. We have had a lot of those go the wrong way and an empty net in ours. We found a way tonight.”

Anze Kopitar is one goal from tying Bernie Nicholls for fourth-most goals in Kings history (327). ... Columbus’ David Savard (illness) was scratched, putting Gabriel Carlsson into an NHL game for the first time since Oct. 4, 2018. Carlsson is the 10th defenceman to dress in a game for the Blue Jackets this year. ... Cam Atkinson suffered a lower-body injury in the second period and did not return. He was the fifth Blue Jackets player hurt in the past four games. Josh Anderson, Sonny Milano, Ryan Murray and Andrew Peake were all out of the lineup.

Kings: At Buffalo on Saturday.