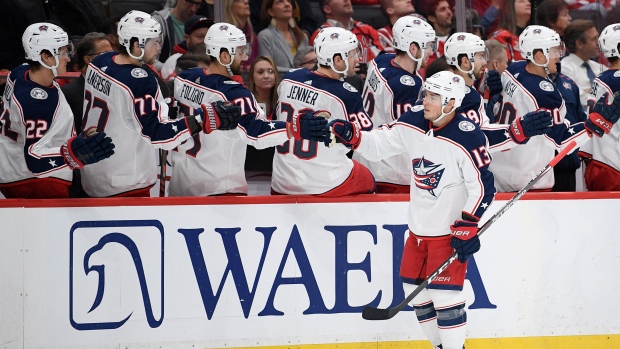 WASHINGTON — Because the Washington Capitals don't lose very often, they'll try to take something from a letdown game against the Columbus Blue Jackets rather than just burning the video.

Fresh off sweeping a four-game road trip, the NHL-leading Capitals fell flat in a 5-2 loss Monday night that snapped their winning streak at six. Washington hadn't lost in regulation since Nov. 20.

The Capitals' seven-game point streak came to an end two days before facing the Boston Bruins in a showdown of the league's top two teams.

“That's a good thing about this league: Everyone can beat everyone if you don't have your best day," centre Nicklas Backstrom said. “There's no easy games in this league, that's for sure. You've just got to bounce back right away. We have a good test on Wednesday against Boston.”

Goaltender Braden Holtby made 19 first-period saves but allowed four goals on 37 shots. Alex Ovechkin scored his 21st of the season early in the third period, and Backstrom added a 6-on-5 goal in the waning minutes in his return from an eight-game injury absence.

"We started getting better and better as the game went on, but it wasn’t enough," Washington forward Carl Hagelin said.

Holtby blamed himself for giving up a bad-angle goal to Riley Nash in the third after Ovechkin had cut the deficit to one.

“It's obviously one we'd like to have back, but we played hard," Holtby said. "They played a really good game. In the end, their third goal killed us and move on.”

Cam Atkinson scored twice, including an empty-netter, and looks to be heating up after a rough first quarter of the season. Atkinson has three goals in three games after just four in his first 27.

“Maybe that will loosen him up and allow him to play.” Blue Jackets coach John Tortorella said. “The biggest thing with him is the energy that I just don’t think has been there.”

Scoring struggles by Atkinson and other top Blue Jackets players are a large reason for the team's struggles this season after the departures of Artemi Panarin, Sergei Bobrovsky and Matt Duchene. Tortorella lamented taking ice time away from Atkinson and said the six-time 20-goal scorer needs to make some adjustments to get out of his funk.

“I think Cam’s got to realize he’s got to help himself a little,” Tortorella said. “This team is looking for some scoring desperately and the guys that we've been counting on just have not been there. It's really put us into a jam here the first 30 games, and (Atkinson) is one of them.”

Ryan Murray and Oliver Bjorkstrand also scored for the Blue Jackets, who snapped their four-game skid. Columbus won for just the third time in nine games.

Goaltender Joonas Korpisalo, who faced only six shots in the first period, came alive when he saw more action and finished with 37 saves.

NOTES: Capitals D John Carlson was named the NHL's first star of the week after putting up six points in three games, including two winning goals. ... F Travis Boyd was a healthy scratch for the Capitals. ... Washington equipment manager Craig “Woody” Leydig was honoured during the first period for working his 2,500th NHL game. ... Blue Jackets F Emil Bemstrom returned to Columbus to see doctors about an upper-body injury suffered Saturday at Florida. ... F Alexander Wennberg returned to the Blue Jackets' lineup after being a healthy scratch against the Panthers.

Capitals: Look to beat the Bruins for the 16th time in 17 meetings when they face off Wednesday.