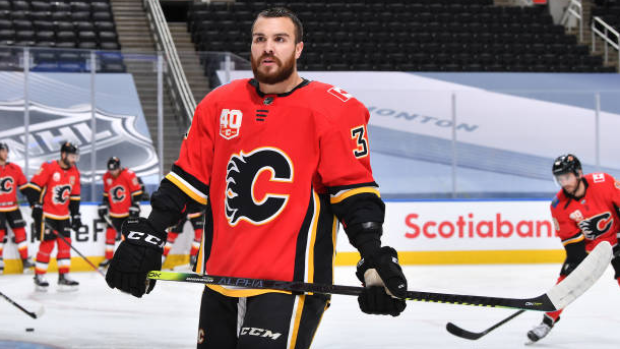 The 31-year-old Rinaldo, who signed a one-year, two-way contract with the Jackets last month, has been vocal in his stance against mandatory COVID-19 vaccines and spoke at an anti-vaccine passport rally in Hamilton last week.

"We do everything as a team. That’s a requirement of being a Blue Jacket. We’re going with the group we have here, which is 100 per cent vaccinated. We’ll see how it develops," Kekalainen told Aaron Portzline of The Athletic on Tuesday.

“We’re going to have 67 players come into camp, and they’re all fully vaccinated," Davidson said. "It’s a really important issue for us. It’s a team-first issue. We win as a team and lose as a team. Everything we do, we do together."

Rinaldo will instead attend training camp for the Cleveland Monsters, the team's AHL affiliate, later this month.

The Mississauga, Ont., native appeared in four games with the Calgary Flames last season and has scored a total of 18 goals and 24 assists over 374 career games in the NHL with the Philadelphia Flyers, Boston Bruins, Arizona Coyotes, Nashville Predators and Flames. Rinaldo has also racked up a total of 758 penalty since entering the league in 2010.

Earlier this month, the Blue Jackets announced that AHL coach Steve McCarthy would replace Sylvain Lefebvre as an assistant on the Columbus staff after Lefebvre elected not to receive the COVID-19 vaccine.