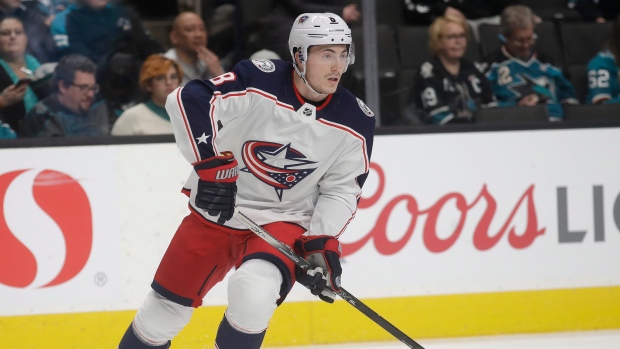 Columbus Blue Jackets defenceman Zach Werenski is out for the rest of the season and scheduled for sports hernia surgery, the latest blow to a team that has fallen out of playoff contention and is expected to sell at the NHL trade deadline.

Werenski was placed on injured reserve Friday and is set for surgery next week. His injury comes days after forward Boone Jenner was ruled out for the remainder of the season after undergoing an operation to repair a broken finger.

“Zach has been playing through the injury for most of the season," general manager Jarmo Kekalainen said. “As much as we would like to have him in the lineup, having the surgery now is the right decision and will allow him to be 100% before the start of training camp in the fall.”

Werenski, 23, trailed only fellow defenceman Seth Jones in ice time this season, averaging over 24 minutes a game. He had 20 points in 35 games as a bright spot in an increasingly rough season for the Blue Jackets.

They've lost eight of their past 10 games to fall to seventh place in the eight-team Central Division. Even with a temporary realignment for the 2021 season, it's a disappointing result for a team that made the playoffs each of the past four years.

“Not a good feeling at all,” Jones said. “We hold ourselves to a standard here, and we didn’t seem to meet that this year. It’s definitely unfortunate. It’s a feeling in your stomach that is just not a good one.”

David Savard was scratched Thursday night in preparation of Columbus trading the pending free agent defenceman before the Monday afternoon deadline. Sitting Savard signalled to the locker room that the season is over, and the next scratching could be captain Nick Foligno, who is also set to be a free agent and could be moved to a contender.

“Ultimately this is what happens when you put yourself as a team in this situation,” said forward Cam Atkinson, who's tied with Savard as the organization's longest-tenured player. “Not the situation that we want to be in and we haven’t been in in a long time. Savvy’s been a guy that’s been here for a long time and one of the faces of this organization for a long time and plays the right way every single day.”

More changes are expected this off-season, with coach John Tortorella's contract expiring. Asked if he planned to play young players the rest of the season, Tortorella said, “(With) the amount of injuries that we have, we’re going to have to do it that way.”

“You put the uniform on, you try to win,” said Tortorella, who won the Stanley Cup with Tampa Bay in 2004. “But we’re teaching all the time. We need teaching.”

Injuries and underachieving performances derailed the Blue Jackets this season. They lost winger Gustav Nyquist to a shoulder injury in training camp and have recently been without injured forwards Emil Bemstrom and Riley Nash.

A trade of centre Pierre-Luc Dubois to Winnipeg for scoring winger Patrik Laine and Central Ohio native Jack Roslovic also did not work out well for the Blue Jackets. Laine, who scored 140 goals in four-plus seasons with the Jets, has only seven goals and seven assists in 32 games for Columbus.

“Obviously, it’s been an up-and-down year,” forward Oliver Bjorkstrand said. “I don’t really know really what went wrong this year, but we’ve got to be better.”