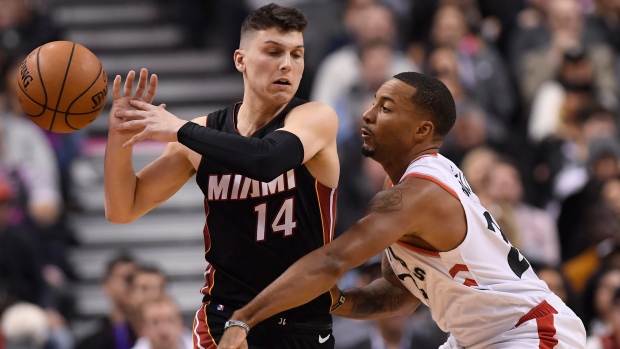 TORONTO – The Raptors had no business pushing Miami to overtime and being in position to steal a win on Tuesday.

Pascal Siakam had one of his worst outings of the season. Kyle Lowry was rusty in his return. As a team, they weren’t as crisp as they had been throughout their seven-game winning streak, on either end of the floor.

They had difficulty executing on offence and, for most of the night, they were a step slow defensively. They were simply outplayed, and they knew it.

“It was one of those kind of weird nights,” said head coach Nick Nurse, following his team’s 121-110 OT defeat at the hands of the Heat. “Nothing seemed to be quite as you thought it would be. I woke up this morning wondering how we were ahead with 50 seconds to go in that game. Seriously, after watching the film, if there wasn’t a scoreboard on the bottom, I would have thought we were down 35 with a minute to go.”

Trailing for most of the game, the Raptors put together a late fourth-quarter run to keep things in reach. However, with the slumping Lowry and the unselfish-to-a-fault Marc Gasol passing up good looks, and the uncharacteristically passive Siakam attempting just one shot in the frame, it was Norman Powell that led the charge.

Powell scored 13 of his team-high 23 points in the fourth, hitting five of his seven shots and three of four three-point attempts.

It wasn’t unusual to see him playing well – the fifth-year guard has been on a roll lately, having started the previous 11 games in place of the injured Lowry. But with Lowry back and Powell returning to his regular role off the bench, there was some question as to whether or not he would be able to keep it up.

Historically, Powell has performed better as a starter, and he’s not alone. Many players have trouble finding and maintaining their rhythm coming off the pine. And to make matters worse, no Raptors player has seen their role fluctuate as much as Powell during his five seasons in Toronto.

Now, once again, he’s been asked to readjust.

“[Before Tuesday’s game] I just kind of told him, I said, ‘Norm, great job, great great job filling in, but this is in reality your role,’ ” Nurse recalled. “ ‘Your role is an off the bench guy for this team, so let’s go kick some butt in this role and start getting used to it.’ And I was proud of him for doing that last night. He was huge.”

Powell started the evening on the bench and that’s where he was supposed to finish it. But with the offence struggling and the 26-year-old in a groove, Nurse decided to close with him instead of OG Anunoby. Powell ended up playing the final 23 minutes of the game.

It’s no secret that Nurse has been looking for more consistency from the swingman. A few weeks ago the Raptors’ often-candid head coach challenged Powell, both privately and publicly.

“There’s something there we need to fix,” Nurse told reporters in mid-November. Powell had just scored 26 points in Dallas a few nights after being held to two points in Portland.

“We don’t expect him to do it every night, 20-plus [points] every night, but maybe instead of it being one out of four nights we can get it to one out of three, and we chip away at it.”

Since then, Powell has scored in double figures in seven of eight games. He did have a couple of rough outings sandwiched in between – in wins over Philadelphia and New York – but he’s been excellent over the last three contests, which included a career-high 33-point game against Orlando.

In 13 games since Lowry and Serge Ibaka went down in New Orleans, Powell is averaging 16.5 points on 50 per cent shooting (43 per cent from three-point range) in 31 minutes per contest. He started all but two of those 13 games and reached double figures in 11 of them.

It’s almost certainly been the best stretch of his career, and the Raptors are hoping he can build off Tuesday’s performance and continue his strong, and consistent, play as a reserve.

Nurse insisted that Powell was understanding and accepting of his role when they spoke. Powell rightly pointed out that he has always been a team player, ready to buy in regardless of what they’ve asked of him. At times that’s meant he’s bounced in and out of the rotation.

Now, whether he’s filling in as a spot starter or coming off the bench, at least he knows his minutes are coming. He’s playing over 28 per game this season, nearly 10 more than he logged last year. As one of Nurse’s seven trusted returnees, he doesn’t have to worry about whether or not he’ll see the floor. Instead he can focus on what he’s doing when he’s out there.

“I just think consistency comes with being able to be out there, and being able to get a feel, get a flow, get a touch for the game,” Powell said. “When you get that, the consistency starts to creep in more, and the more shots you get, you start to get a better feel for it.”

“[He is] finding his groove again and is sliding back into his confidence,” said Fred VanVleet. “You can see when he’s in rhythm and feeling good and last night was very encouraging just because I know how hard it is to go from starting all those games to right back on the bench. To see him slide back into the bench role and still continue the same type of play he was doing before is very encouraging.”

VanVleet brought up an interesting point. It’s hard to be consistent without being comfortable in your role, but in many cases teams are reluctant to give a player a role they can get comfortable in unless they’re consistent enough to earn it. It’s a chicken and egg scenario.

Powell is still a growing player. He still makes mistakes on both ends of the floor and will occasionally try to do too much, which can frustrate the coaches. His progress hasn’t always been linear, there have been and will continue to be peaks and valleys, but you can see the improvements he’s made in his game.

“My confidence never changes, my confidence comes from the work that I put in,” Powell said. “I trust that I put enough work in and I continue to work and I continue to grind and increase my skill set and my craft and try to be the best basketball player I can be. That's where my confidence comes from, it doesn't come from a game where I play well or a game that I don't play so well. Those are going to happen over the course of a season, but I just go out there and play basketball the way I know how to play, that's just what I've always done, and that's what I'll continue to do.”​