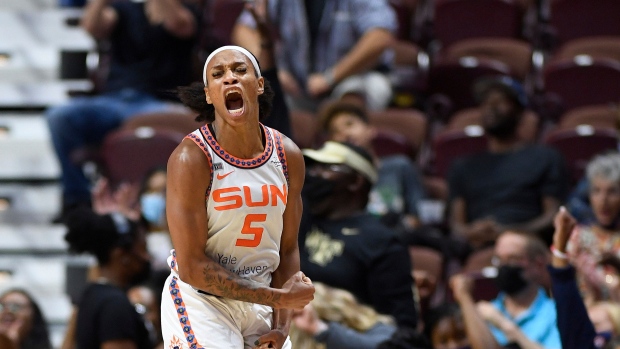 Connecticut (24-6), which has won 12 consecutive games, snapped the Mercury's 10-game win streak. It was just the second matchup ever of teams with win streaks of 10-plus games. Minnesota and Los Angeles met in 2016 when both were undefeated.

Phoenix (19-11) fell into fifth in the WNBA standings, a half-game behind Minnesota. The top four seeds earn a first-round bye.

Brittney Griner made a short jumper to pull the Mercury within two early in the fourth quarter but Natasha Heideman answered with a 3-pointer to spark an 11-4 run capped when Jones made a layup that made it 70-61 with 2:28 to play.

Griner had 23 points, 12 rebounds and three blocks to lead Phoenix. She missed a 15-foot jumper early in the second quarter but Brianna Turner grabbed the offensive rebound and then hit Griner cutting toward the basket for a one-handed dunk. The two-time WNBA scoring champion has a career-high four dunks this season and has 16 of the 19 regular-season dunks in league history.

Diana Taurasi didn't play because of an injured ankle.