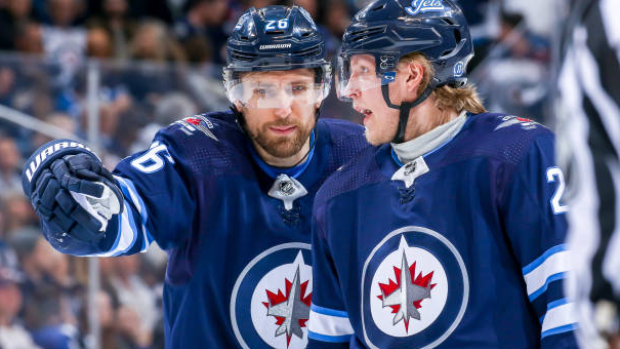 Eight months ago, the hockey community was talking about whether or not the Winnipeg Jets could win a Stanley Cup. Right now, it’s fair to wonder if they’ll manage to get out of the first round.

The 2018-19 regular season has provided some wild splits. The most notable might be the Buffalo Sabres, who were the league’s winningest team through American Thanksgiving and the league’s worst team since. Then there’s the St. Louis Blues, who moved from dead last on New Year’s Day to clinching a playoff berth and making a serious play for the Central Division title.

But maybe the most material shift in performance has happened in Winnipeg. This Jets team has been on the precipice of greatness for a couple of seasons. They’ve always had the skating talent throughout the lineup, and Connor Hellebuyck has given them a reliable presence in the crease. Top to bottom, this team should be able to skate the majority of opponents out of the rink. For a couple of years now, they have.

Something changed midway through this season, though. A Winnipeg team notorious for outshooting, outchancing and outscoring their opponents on a regular basis has taken a 180-degree turn. And it’s not just the underlying performance numbers that are a reason for concern. We are talking about a team that has seen their disposition in the standings erode with each passing month: 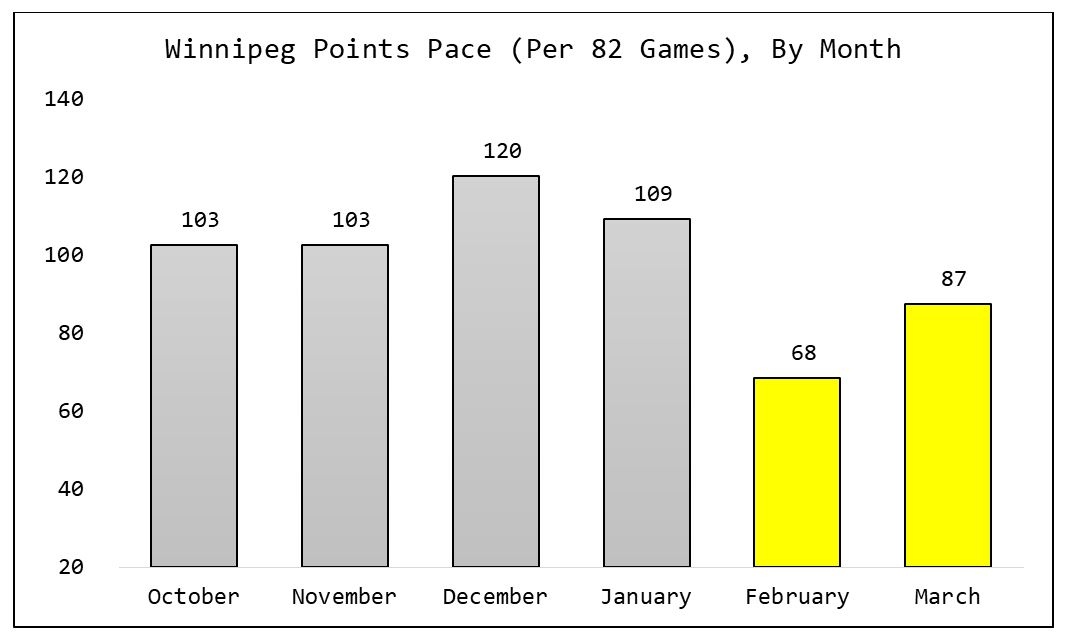 Teams go through rough patches all of the time. A two-month rough patch is a bit less frequent. I think it’s fair to say that this is exactly what Paul Maurice and the Jets coaching staff didn’t want to see as their team heads for a first-round series against the likes of St. Louis or Nashville.

I mentioned earlier that Winnipeg’s underlying numbers have fallen off a cliff, running parallel with what you are seeing in the standings. The Jets have managed to hang on – by a thread, maybe – thanks to an electric power play and great individual performances in spots. Absent those components, you have some gruesome team-level performance.

We can see that, at least in the standings, the slide began in February – more than two months and about 30 games ago. If we use that as our pre/post, we can see that not only has Winnipeg’s performance substantially degraded of late, but it’s made them appear as one of the weakest teams still alive as we head into the playoffs. 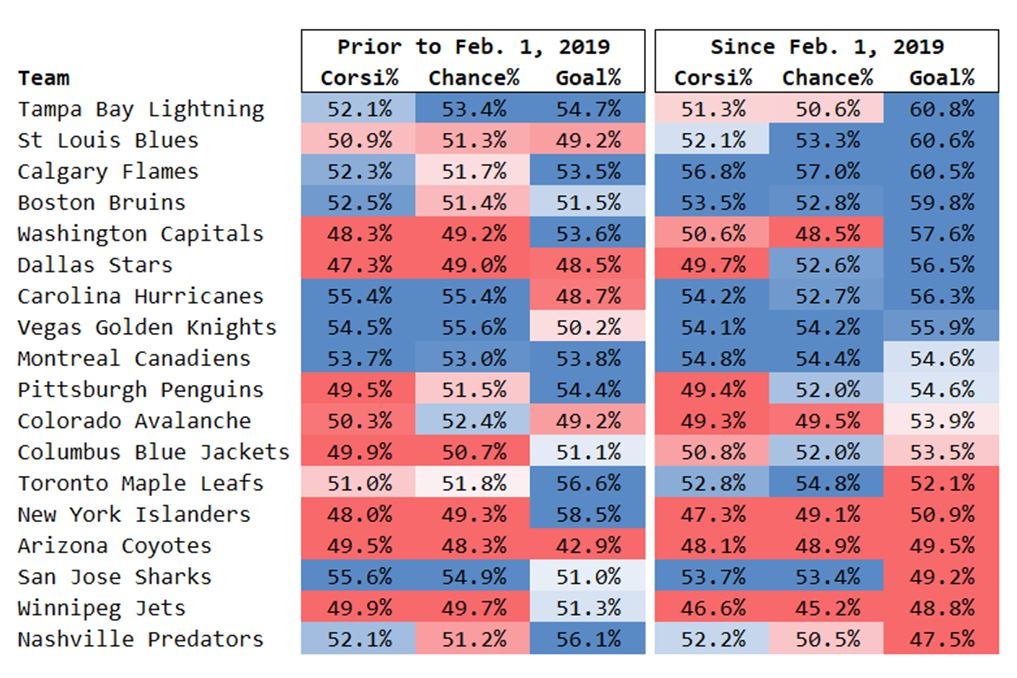 Those are gory numbers, and they are especially ugly when you compare Winnipeg against playoff-calibre clubs. The one saving grace is that Nashville – a very possible first-round opponent for the Jets – has seen similar struggles during the second half of the year.

But put Nashville aside. At the end of the day, this is a team that has been playing some truly poor hockey for a significant period of time. That’s an issue when we know that performance over the final stretch of the regular season is a strong predictor of playoff success – even more so than incorporating full season data.

We can conclude the Jets aren’t playing their best hockey right now. But how did the team get here? Who are the contributors? Macro-level descriptive data on Winnipeg might explain why their fate in the standings has changed, but it doesn’t fully explain where things are going awry at the individual level. So I completed the same pre-February/post-February assessment at the individual level, ordered by common lines and pairings. The results are fascinating: 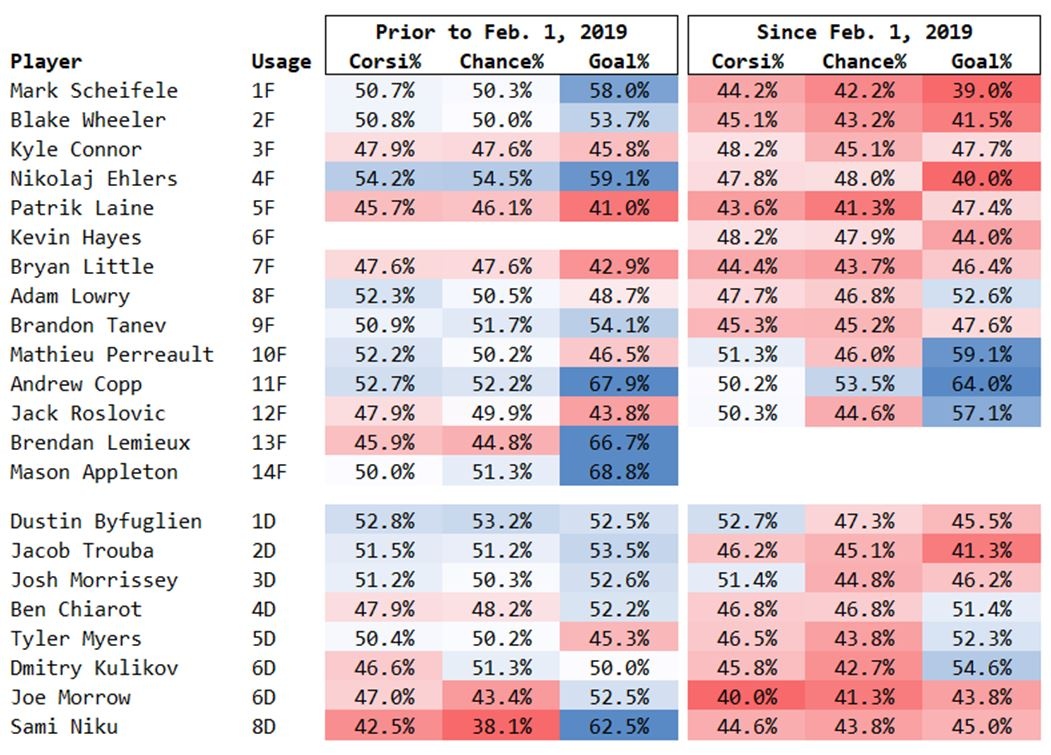 It’s one thing if the Jets’ depth players were sinking the team-level performance – that, although not desirable in the short term, could be something that’s mitigated by way of various deployment strategies come playoff time. Long term, it’s something you can fix relatively easy through the trade market and free agency.

But the opposite is actually true. The only players holding the line in the forward ranks are the depth players – guys like Mathieu Perreault, Andrew Copp, and Jack Roslovic are at least driving decent possession and scoring chance numbers with some favourable shooting luck to boot.

But the numbers for Winnipeg’s top-nine forwards are gruesome. Stars like Blake Wheeler, Patrik Laine and Mark Scheifele have seen their numbers absolutely crater. I can’t express enough how rare it is to find this degree of substandard performance with high-end players.

The Jets are only getting about 43 per cent of the scoring chances with their best players on the ice, and the two skaters who are probably the most critical in determining how successful Winnipeg will be over the next few weeks – the aforementioned Scheifele and Laine – are the two that are bleeding the most.

So what broke Winnipeg? That’s the million-dollar question and really would require comprehensive, dedicated video review.

To my eye, one of the things this Jets team has struggled with increasingly over the second half of the season is their ability to exit the defensive zone with control. It seems that the forwards are rarely in position for clean exit passes from the blueline, which forces the defence to carry out or throw the puck off the boards into the neutral zone. Neither option is truly preferable. What tends to happen is the opponent retrieves a loose puck and restarts an attacking sequence. Not only does this lead to increased defensive zone time, but it mitigates the offensive firepower in the Winnipeg lineup.

The Jets have a long track record of delivering solid results and still have one of the more dangerous power-play units in the league. But at 5-on-5, the Jets appear fundamentally broken. It’s an ominous sign for a team earmarked as a Stanley Cup favourite last summer – and, depending on the matchup, could be the reason they are sent home in the first round.