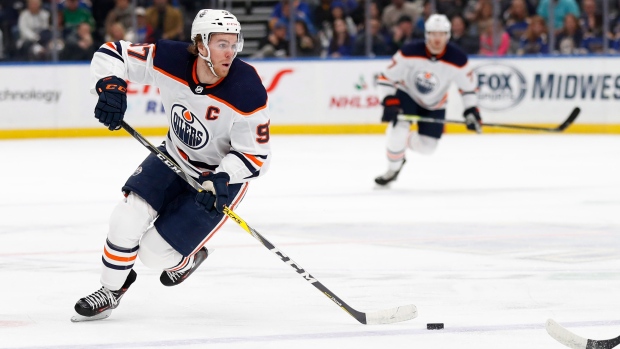 Edmonton Oilers captain Connor McDavid appears to be on pace to claim his second career Hart Trophy as he was named the winner of the award in the Professional Hockey Writers Association's mid-season awards  on Thursday.

McDavid currently leads the NHL with 76 points through 49 games, one more than teammate Leon Draisaitl, who did not place in the top three in the PHWA vote.

McDavid's mid-season results appear to bode well for him as he chases his first Hart Trophy since 2017. Six of the eight players voted as mid-season traditional award winners last year went on to win their respective awards in June.

“We’re proud of the work our members put in throughout the entire season, crunching numbers, following trends and speaking to sources to gather the best ballot possible,” PHWA president Frank Seravalli said. “The Midseason Awards are the latest example of that, beginning an independent evaluation process in January that won’t conclude until early April when the real ballots are returned.”

Washington Capitals defenceman John Carlson was named the mid-season winner of the Norris Trophy. Carlson currently sits 10th in the NHL in points with 60, 12 more than any other defenceman.

Winnipeg Jets goaltender Connor Hellebuyck was voted the mid-season Vezina winner after starting the year with a 21-16-4 record, a .917 save percentage and a 2.74 goals-against average.

Toronto Maple Leafs winger William Nylander was named Comeback Player of the Year in the mid-season vote. Nylander has 22 goals and 43 points in 49 games this season after posting seven goals and 27 points in 54 games after returning from a contract standoff a year ago. Ottawa Senators forward Anthony Duclair place second in the vote with 21 goals 33 points in 47 games this year after posting 19 goals and 33 points in 74 games last season.

The full results for the mid-season voting are as follows: