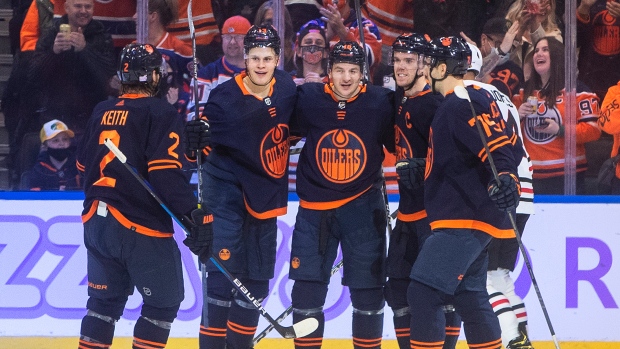 EDMONTON — It was the first time in eight games that the Edmonton Oilers scored the first goal and it led to a super-charged first period.

Connor McDavid and Leon Draisaitl each had a goal and an assist as the Oilers won their second in a row, getting past the Chicago Blackhawks 5-2 on Saturday.

Tyson Barrie, Kailer Yamamoto and Ryan McLeod also scored for the Oilers (13-4-0), which tallied four first-period goals to improve to 8-1-0 at home.

“I liked the win. I thought we were a little loose, especially early,” McDavid said. “I liked our second period. I thought we gave them some chances that we probably shouldn’t have given them, but overall I liked our game and that we won.”

Alex DeBrincat had a pair of goals for the Blackhawks (5-10-2), which saw a four-game winning streak halted.

“We gave up two shorthanded, gave them a power play and then we take another penalty and go down five-on-three and they score again. A good team like that, with the talent they have, you can’t do that,” said Chicago interim head coach Derek King, who suffered the first loss in his tenure since taking over from Jeremy Colliton.

“You can’t let it snowball, so we have to clean up some areas.”

The Oilers struck first midway through the opening period. The rebound of Evan Bouchard's point shot came out to McDavid, who netted his 12th of the season before Chicago goaltender Kevin Lankinen could get across. The goal extended McDavid’s point streak to 17 games.

Edmonton’s lethal power play cashed in on a five-on-three just over a minute later as Barrie unleashed a shot from the high slot.

The Oilers made it 3-0 with a short-handed tally with under five minutes to play as Seth Jones’ errant drop pass was picked off by Yamamoto, who beat Lankinen high to the glove side.

Edmonton kept it coming as McLeod scored his second career NHL goal with 1:28 left, showing deft hands to score on the backhand.

Picking up an assist on the play was Philip Broberg, who was making his NHL debut. The 20-year-old was the eighth overall selection in the 2019 NHL Entry Draft.

“He played with poise, played within his game, very much in control,” said Oilers head coach Dave Tippett of Broberg. “The little things that should have gotten done were done. He was solid in all those areas and drew a penalty. He played the game smart, didn’t put himself in trouble.”

Chicago managed to get one back with just 20 seconds left in the first period as DeBrincat tipped a shot just under the crossbar behind Oilers goalie Stuart Skinner, who finished with 28 saves.

“He has been playing phenomenal,” Yamamoto said of the rookie third-string goalie Skinner, who picked up his second straight win and the third NHL victory of his career.

“He’s been a brick wall back there for us. We need him to keep having good games.”

After a scoreless second, the Blackhawks made it 4-2 nine minutes into the third as DeBrincat scored his second of the game and 11th of the season on a two-on-one shortly after a penalty expired.

Edmonton put the game away with 3:32 left as Draisaitl scored his league-leading 18th goal on a short-handed breakaway – Edmonton’s second shorty of the contest.

The Blackhawks have a quick turnaround as they head to Vancouver to face the Canucks on Sunday. The Oilers begin a three-game road trip in Dallas on Tuesday.

NOTES: Oilers defenceman Duncan Keith played against his old team for the first time since being traded to Edmonton in the summer. Keith played in 1,192 career NHL games for the Blackhawks, earning three Stanley Cups, two Norris Trophies, and a Conn Smythe Trophy during his 16 seasons in Chicago.