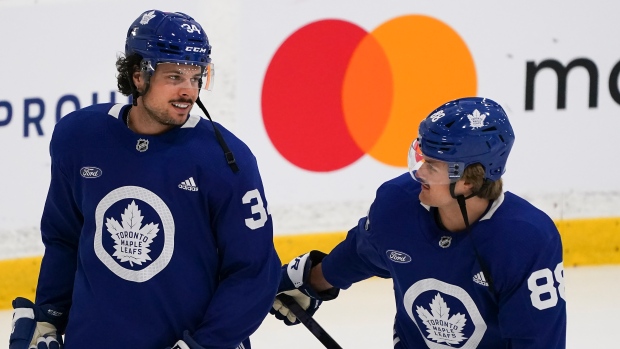 TSN Toronto Reporter Mark Masters reports on the Maple Leafs, who skated in two groups at the Ford Performance Centre on Thursday.

"Nice to be on the same ice as Auston and looks like he's doing pretty well," said Ritchie. "He's a big presence and so skilled and that shot is lethal."

Matthews is working his way back from off-season wrist surgery. There is no timeline for his return to game action, but the 24-year-old centre has expressed optimism about being ready for opening night.

"He looks good," said Marner. "He looks great when he is out there and the wrist doesn't seem to bother him too much right now."

But, as has been the case the last few days, Matthews left the ice midway through the main practice.

"He's continuing to progress," said head coach Sheldon Keefe. "It's about building up the strength in the wrist to the point that he's confident in receiving passes, leaning into shots and of course faceoffs and contact. The fact we've seen him out every single day with no setbacks is a good thing."

It's good for Ritchie as well. He's new to the team and readily admits he's never played with guys like Marner and Matthews before.

"These are some of the most skilled guys in the league and it's cool to get to be on the same ice as them and learn things from them," the 25-year-old said.

They've only played one pre-season game together, but so far Ritchie likes the chemistry with Marner.

"He makes so many good plays. He never panics with it. He's always in the right spot and a dream to play with."

Keefe remains confident the the top line will click with Ritchie filling the spot vacated by Zach Hyman.

"For the size that he is (6-foot-3, 236 pounds) and the physicality that he brings, for those who don't know him as well, you're going to be surprised with how good his hands are, how good his shot is, how good he is at making plays in tight spaces," Keefe said while noting many big men struggle in those areas. "He is a guy that can do that and that's [why] I think that can complement Mitch and Auston well. With Mitch we're seeing it now, but we haven't had a lot of time with Auston yet."

The biggest positioning change is Marner moving from the flank to the middle of the ice.

"He's so good when he's in the middle of the ice," said Tavares, "almost nobody harder to stop because he's so hard to read and so unpredictable. He's going to get a lot of good looks himself or create opportunities for those guys on the flanks."

"It will hopefully bring guys towards me," said Marner, "and leave seams open and make it harder for teams [who will] not know who to take. We'll go off feel and use our creativity."

Keefe likes how Marner has embraced the new assignment.

"He's working at it, asking questions, getting reps in so that's the most positive thing that I've seen," the coach noted.

The new-look unit, minus Matthews, will get its first real test on Friday night in the annual Blue vs. White Game at Scotiabank Arena. The scrimmage will feature three 20-minute periods, but the last one will be all special teams work.

The squads are set 👀

Wednesday was Canada's first National Day for Truth and Reconciliation, which honours the lost children and survivors of residential schools, their families and communities. Leafs players marked the occasion by wearing orange shirts with the words, 'Every Child Matters.'

"I grew up around a lot of Indigenous people playing the game of lacrosse," said Tavares. "I was around that community a lot and that culture and tremendous people and learned a lot through the game of lacrosse itself and fell in love with it so, to me, it has a little extra meaning. But it should have significant meaning to everybody because of what happened and how we can learn from it and not just reconcile, but make the Indigenous peoples and their culture and who they are a main part of our society and us as Canadians."

For Orange Shirt Day 🧡 🧡 🧡 and the first National Day for Truth & Reconciliation, John and Aryne on behalf of the Foundation will be making a donation to our respected partner @theballantyneproject who is currently working with remote Indigenous communities.#orangeshirtday pic.twitter.com/AthaAhFx1Q

Tavares played competitive lacrosse through his first season in the Ontario Hockey League. He is the nephew of John Tavares, who is highest scoring player in National Lacrosse League history.

How did playing lacrosse help his hockey career?

"People talk about the hand-eye co-ordination but the biggest thing I found was just the physical nature of lacrosse," the Leafs captain said.

"It's just a little bit higher than hockey. Your ability to roll off checks, move through traffic and take contact with and without the ball, seemed to really help me in small areas around the ice, around the net, just finding ways to create openings and get shots off or protect the puck and create plays or extend plays."

"To know that I got to play, and potentially have my children play hockey [and] to face these types of incidents, I can see why people of colour don't want to play hockey," Simmonds said. "I can see why parents are completely afraid to put their kids into the sport. I'm the same way as well. I've faced a lot of these things myself and I don't even know if I'd want my kids playing hockey to be quite honest."

Smereck will play a game next week with HC Donbass Donetsk, but no longer sees a future in the UHL.

Jalen's reaction to the racism he faced on the ice, thoughts on suspension to Andrei Deniskin, and his own future in the sport👇🏾🔻https://t.co/abWTWWt1t0

Deniskin has been suspended 13 games, which is the most allowed under the league's code of conduct. The International Ice Hockey Federation could still hand out its own punishment

"If I had it up to me, you got two choices: You're gonna either face off against us [and] we're gonna kick the crap out of you — or you're banned for life. It's come to a point where it's sickening, it's disgusting. The way that guy did what he did, without any hesitancy, makes me sick to my stomach," said Simmonds, who is part of the Hockey Diversity Alliance. "It's disgusting, honestly. Quite frankly, I'm getting sick of talking about stuff like this because it continues to happen.

"The IIHF, the UHL, whoever is the governing body there has to do something about that. That kid needs to be banned. I think that's the problem. You know, things like this are happening and it's not like it just happens [by accident or] it's a one-off. We've seen it happen a million times already and the punishments definitely don't match the crime."