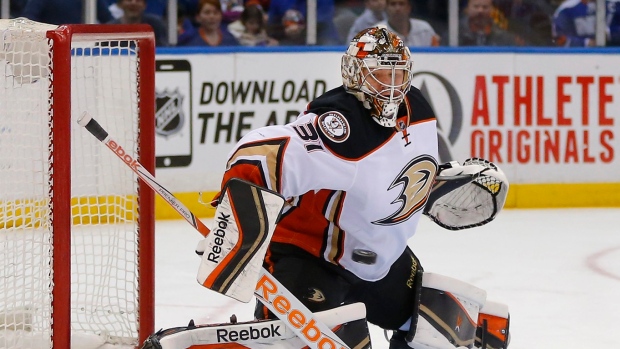 Gibson, 22, may start against St. Louis on Friday night. On Wednesday, he was a surprise selection for the NHL All-Star Game.

All of which raises the question: Why did the Ducks trade for goaltender Dustin Tokarski from Montreal? Tokarski, 26, was acquired from the Canadiens on Thursday in exchange for left winger Max Friberg.

Tokarski only adds to Anaheim’s logjam in the crease, giving the organization four net minders with NHL experience. Frederik Andersen is Gibson’s backup in the NHL, and veteran Anton Khudobin is Anaheim’s starter in San Diego of the AHL.

With Gibson already taking the reins before his three-year, $6.9 million deal kicks in next season, conventional wisdom would suggest Andersen could be on the move for the right price. The Ducks would prefer to trade the 29-year-old Khudobin first, but his $2.25 million salary-cap hit is higher than the average backup.

Andersen began the year as the Ducks’ starter, keeping the offensively challenged team in most games before an injury opened the door for Gibson. In 103 NHL appearances, Andersen’s career save percentage is .917, a shade above the league average of .915, to go along with a 60-25-10 record and 2.38 goals-against average.

Andersen, 26, has two playoff runs under his belt, including last spring’s trip to the Western Conference final.

Who would have interest in Andersen?

Nothing appears imminent. Arizona and Calgary need the most help. The Flames have the NHL’s worst team save percentage (.893). Their goaltending has stabilized of late, with Karri Ramo rebounding, but it is still a point of concern. Arizona’s Mike Smith didn’t play well to start the season. Now he’s out with a long-term injury, so the Coyotes have been relying on Louis Domingue to keep them in the Pacific race.

The issue with both teams is the Ducks would be aiding a division rival and chief competitor for the playoffs. Plus, the Flames seem lukewarm on Andersen at the moment.

Thirteen of the top 20 teams in save percentage come from the East, where there is less demand for a starter.

Andersen could well be one team’s Devan Dubnyk this season - someone who can backstop a new team to a turnaround. It’s just one more thing to keep in mind as we inch toward the Feb. 29 trade deadline.