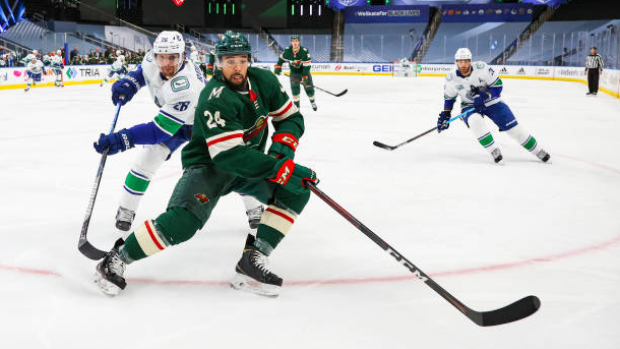 The Minnesota Wild's decision to extend defenceman Jonas Brodin on a seven-year, $42 million contract on Tuesday could leave Matt Dumba as the odd man out on the team's blueline this fall.

Michael Russo of The Athletic had previously reported that Wild general manager Bill Guerin was actively shopping Dumba, adding it was likely with Brodin's pending extension in mind. Russo writes that with Brodin joining fellow blueliners Jared Spurgeon and Ryan Suter with no-move clauses, the Wild would be forced to either protect eight skaters and a goalie (instead of seven forwards, three defencemen and a goaltender) or make a deal with the expansion Seattle Kraken to avoid losing Dumba for nothing in next year's expansion draft. The Wild traded Alex Tuch to the Vegas Golden Knights in 2017 in order to avoid to losing Dumba in that expansion draft.

Russo believes the Wild could instead move Dumba this fall in order to secure forward help, though Guerin said Tuesday he doesn't having any immediate plans to shake up his defence.

“We could always think about doing that, but we’re really happy with our D corps the way it is," Guerin said. "Not saying I won’t try to do anything else. It was kind of first things first with Jonas, let’s get him locked up, then see where we are.”

Dumba is signed through the 2022-23 season at a $6 million cap hit. The 26-year-old posted six goals and 24 points in 69 games this season, adding one assist in four games in the league's Return to Play.

Francois Gagnon of RDS reports that the Montreal Canadiens are close to reaching a long-term contract with newly acquired defenceman Joel Edmundson.

Acquired from the Carolina Hurricanes for a fifth-round pick over the weekend, Edmundson is currently slated to become an unrestricted free agent on Oct. 9.

Gagnon reports the contact is expected to be three-to-five years in length and worth around $3.5 to $4 million annually.

The 27-year-old has 20 goals and 72 points in 337 career NHL games with the St. Louis Blues and Hurricanes. He was a part of the Blues' 2019 Stanley Cup championship.

Patrick Johnston of The Vancouver Province writes that the Canucks could be a suitor for Dumba's services to improve their blueline this off-season.

Johnston believes the right-shooting defenceman could pair with Quinn Hughes in Vancouver and points to Brock Boeser as the player who could be moved back the other way.

Boeser, who had 16 goals and 45 points in 57 games this season, faced speculation on his future with the Canucks prior to the Return to Play, with general manager Jim Benning responding that he had "no intention of trading Brock Boeser."

Johnston, however, writes that if the Canucks elect to re-sign trade deadline acquisition Tyler Toffoli, Boeser's future in Vancouver will be further in doubt. Toffoli had six goals and 10 points in 10 games upon joining the Canucks, but was limited to seven games in the Return to Play, posting two goals and four points.

Washington Capitals general manager Brian MacLellan confirmed Tuesday that the team is not expected to reach a deal with Braden Holtby before he hits the open market on Oct. 9. MacLellan, however, left the door open for Holtby to return to the team next month.

“Yeah, I would expect him to go to free agency," MacLellan said. "The goalie market is probably a little unusually deep this year. I talked to his agent last week briefly about where he’s at and the kind of opportunities he’s looking for. I would assume he goes to free agency and we’ll keep in contact with him throughout the free agency period to see if he’s getting what he wants.”

Playing in the final season of a five-year, $30.5 million contract ($6.1 million AAV), Holtby was pushed for starts this season by rookie Ilya Samsonov. The 23-year-old went 16-6-2 during the regular season with a .913 save percentage and a 2.55 GAA.

Holtby started every game for the Capitals in the NHL's restart, going 2-5-1 with a .906 save percentage and a 2.49 GAA as the Capitals were eliminated in five games by the New York Islanders in their first-round series.