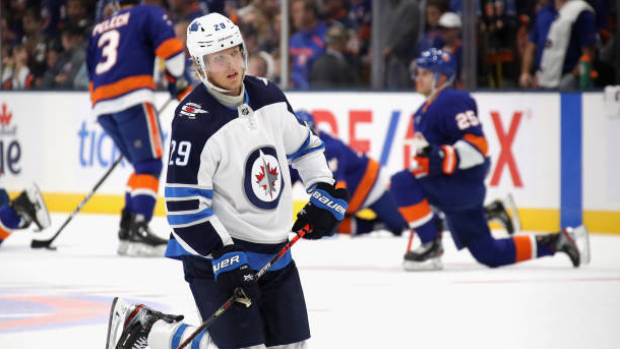 Andrew Gross of Newsday believes the New York Islanders need to add a top-six scorer who can improve their power play after being eliminated in the Eastern Conference Final by the Tampa Bay Lightning.

Gross writes that the Islanders could part with some of their depth on defence to make such a move and points to Winnipeg Jets winger Patrik Laine or New Jersey Devils forward Kyle Palmieri as potential options on the trade market. Gross notes that pending unrestricted free agents Taylor Hall or Mike Hoffman could also fill the need, but the Isles would be required to clear cap space for such a signing.

Laine was listed at No. 5 on TSN's first Trade Bait board of the fall earlier this month, with the Jets believed to be seeking help on blueline and down the middle. Palmieri checked in at No. 7 on the list as he enters the final year of his current deal.

The Islanders currently have just $8.9 million in cap space for next season with Mathew Barzal, Ryan Pulock and Devin Toews slated for restricted free agency. The team also has five pending unrestricted free agents in Matt Martin, Tom Kuhnhackl, Derick Brassard, Andy Greene and Thomas Greiss. Of that group, Gross believes only Martin is likely to be retained.

Michael Russo of The Athletic reports that the Minnesota Wild do not plan to buy out the contract of goaltender Devan Dubnyk, noting the team could potentially open next season with three goaltenders on their roster.

Guerin was blunt in his assessment of the team's goaltending last month after the Wild were eliminated from the Return to Play in the play-in round and stated he would consider upgrading the position this off-season.

"No, the hierarchy's not clear," Guerin said in August. "Whoever's playing well is going to play. I was disappointed in the goaltending this year. (Alex Stalock) had a tremendous year and Devan had an off year, and it needs to be better. That's just the way it is. And if I told you anything different, I'd be lying to you. It was not a strong point for us.

Rookie Kaapo Kahkonen made five starts during the regular season, going 3-1-1 with a .913 save percentage and a 2.96 goals-against average. Guerin noted in August that he expects the 23-year-old to push for a roster spot next season.

"If I have an opportunity to make it better, I will," Guerin said. "But I'm also confident if those guys come back that they're going to be battling for a spot and we've got Kaapo Kahkonen pushing. It just has to be better … flat out. So I can't promise anybody a spot. ... Next year is next year and we're going to be better."

Pending unrestricted free agent Ryan Miller has been working out at the Anaheim Ducks facility as he weighs whether to return to the crease for an 18th NHL season.

“I’m trying to give them good training sessions when I’m out there,” Miller told The Athletic. “I think it’s a win-win and puts us both in a position where I’d like to see where I’m at. Mentally, I’m good for another push for a season. I think I can mentally do it. I think physically I can do it. I have not had any problems. Feel strong.

“I’ve taken care of myself in my career. I think everything is in a good place. I just kind of need the hockey environment to be right. It has to be somewhere I can fit in. We also got to have a season that makes sense.”

Miller, 40, has spent the past three seasons as the Ducks backup, posting a 9-6-4 record this season with a .907 save percentage and a 3.10 goals-against average.

Ducks general manager Bob Murray told The Athletic it's too early to know whether Miller, who sits third among active netminders in games played, will return to the team.

“Was only too happy to help him decide if he wants to keep playing by skating a bit, he said. "He has earned that from this organization. No idea about his future at this time. Far too many moving parts.”