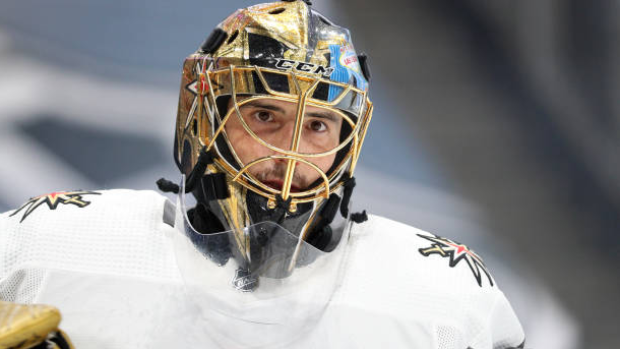 Marc-Andre Fleury was relegated to the backup role for the Vegas Golden Knights during the Return to Play as Robin Lehner took over the starting job.

Lehner is a pending unrestricted free agent this off-season, but there has been plenty of speculation he will re-sign with Vegas, leaving Fleury's future with the team up in the air.

The 35-year-old, who joined Vegas in the expansion draft in 2017, made it clear that he will not be requesting a trade this fall.

“I want to stay in Vegas,” Fleury told The Athletic on Thursday. “I don’t know what the future holds, but I’ve loved every moment since I got here.”

Signed for two more seasons at a $7 million cap hit, Fleury said Wednesday he's open to splitting time with Lehner in the future, though that may not be possible under the cap. Fleury was listed at No. 9 on the updated TSN Trade Bait board on Thursday.

“I understand the business side of hockey, and that I might have to be moved,” Fleury said. “But that’s why they (the front office) are the ones making the decisions.”

Lehner, acquired ahead of the trade deadline from the Chicago Blackhawks, posted a 9-5-2 record in the Edmonton bubble with a .917 save percentage and a 1.99 GAA.

Winnipeg Jets sniper Patrik Laine is listed at No. 5 on the latest TSN Trade Bait Board, and while the Jets are willing to listen to offers, TSN Hockey Insider Darren Dreger reports there doesn't appear to be much of a market for the Finn as of yet.

"Absolutely they're serious. Look, I mean, Patrik Laine's name on the Trade Bait board isn't just eye candy or speculative," Dreger said on Insider Trading. "The Winnipeg Jets know what their needs are. They need a No. 2 centre and they need to bolster the top four on their blue line. And Kevin Cheveldayoff, the general manager, knows they can't solely rely on free agency. What's curious about this, though, is that there hasn't been a lot of action around Patrik Laine. I mean, everyone in the National Hockey League can recognize that he is a star winger. So maybe clubs don't believe that he is available or they're concerned about the economics moving forward as well being an extension or what an arbitration case for Patrik Laine might look like after next season.

"One way or another Cheveldayoff is listening on Patrik Laine."

Laine, 22, scored 28 goals and posted 63 points in 68 games this season during the regular season. He was limited to just one game during the Return to Play due to injury.

TSN Hockey Insider Pierre LeBrun pointed to the Columbus Blue Jackets, Carolina Hurricanes and Montreal Canadiens as teams who could make sense as a landing spot for the  2016 No. 2 overall pick.

"One team that has some interest in Patrik Laine at some level is the Columbus Blue Jackets," LeBrun added on Insider Trading. "Of course, they got ample salary cap room, they lost a big time offensive threat a year ago when our? Artemi Panarin walked into free agency and never really replaced him. And certainly Jarmo Kekalainen has some insight on Patrik Laine, but what is the price? And I think they're kind of sitting in the weeds right now because of that. The Carolina Hurricanes, I'm told, are a team that have had a conversation with the Winnipeg Jets about Patrik Laine, but it didn't get very far. I don't know that the Hurricanes feel there's a fit there at this point. A team that could certainly use some elite scoring on their top line would be the Montreal Canadiens. But I'm told at this juncture that the Montreal Canadiens don't intend to get in on the Laine sweepstakes.

According to Tarik El-Bashir of The Athletic, the Washington Capitals are "actively pursuing an extension" with defenceman Brenden Dillon, while team's other unrestricted free agents - Braden Holtby, Radko Gudas and Ilya Kovalchuk - appear set to hit the open market on Oct. 9.

Dillon was acquired by the Capitals ahead of the trade deadline from the San Jose Sharks in exchange for a 2020 second-round pick and a third-round pick in 2021. The 29-year-old went without a point in 10 games with the Capitals in the regular season and posted one assist in eight games during the Return to Play, ranking third among the team's defenceman in average ice time.

The Capitals have a projected $8.9 million in cap space this off-season and while some teams are facing an internal cap, El-Bashir reports Washington is planning to spend to the ceiling.