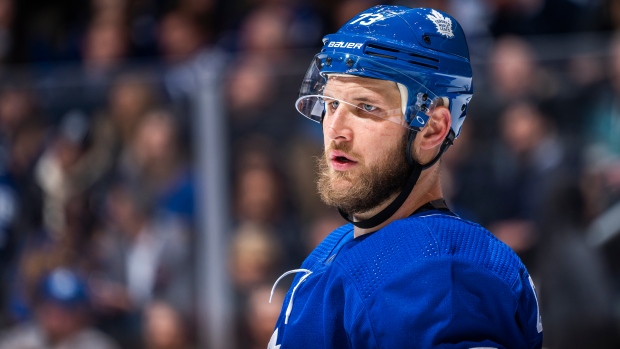 Toronto Maple Leafs forward Kyle Clifford will become an unrestricted free agent next month and his agent, Todd Reynolds told the Terry Koshan of the Toronto Sun on Wednesday that Clifford intends to test the market.

"He's heading for free agency. The Leafs are aware of that," Reynolds told Koshan, who adds that the Maple Leafs' cap situation has forced the issue.

Kyle Clifford will be exploring the open market, his agent, Todd Reynolds, tells me. "He's heading for free agency. The #Leafs are aware of that." TOR's financial situation has forced the issue.

Clifford, 29, had one goal and three points in 16 games with the Maple Leafs this season. He was without a point in five games against the Columbus Blue Jackets during the play-in round.

He is coming off a five-year, $8 million contract signed with the Kings in 2015.

The Minnesota Wild continued to be active in the trade market on Wednesday, acquiring Marcus Johansson from the Buffalo Sabres in exchange for veteran centre Eric Staal.

Speculation, however, continues to swirl around the future of defenceman Matt Dumba, as TSN Hockey Insider Pierre LeBrun said on Insider Trading.

"Well, here’s the interesting thing. I can tell you that teams are calling Minnesota on Dumba, already. I heard that from a couple of teams today," LeBrun said. "The Wild would like a top-six centre back. And [that] was before they traded Eric Staal. So that need is pretty pressing now. And the reason why Dumba is potentially in play is because of the expansion draft next year with Seattle. Jonas Brodin’s new deal has a no-move clause. Jared Spurgeon has a no-move (clause). Ryan Suter has a no-move (clause). You can do the math. Most teams don’t want to protect four defencemen in the expansion draft.

"Now, it doesn’t mean that Dumba has to be moved this off-season. Certainly the Wild could wait until the trade deadline next year before the expansion draft. Or protect four defencemen, which I don’t think is likely. The Winnipeg Jets, by the way, one of the [teams] I believe that have some interest in Dumba. But what they don’t have is a top-six centre to trade Minnesota."

Wild general Bill Guerin also disputed the notion that the need to trade Dumba is pressing.

“We’re happy with the D corps,” Guerin told The Athletic. “Right now, if I were to move Matt, I don’t have to rush. We can play all year with him. We like Matt Dumba. He’s a heck of a player. He’s a great kid. We’re very happy with him, and we think our top-four will go up against anybody. I’m confident in that.”

He stopped short of guaranteeing Dumba wouldn't be moved, though.

“I know the business well enough from a player side, and I wouldn’t want to make an empty promise,” Guerin said. “We’ll try to improve our team as much as we can when we can.”

Dumba is signed through the 2022-23 season at a $6 million cap hit. The 26-year-old posted six goals and 24 points in 69 games this season, adding one assist in four games in the league's Return to Play.

LeBrun also said on Insider Trading that the latest offer from the St. Louis Blues to Alex Pietrangelo once again fell short of the defenceman's expectations.

Pietrangelo told LeBrun for The Athletic that there "hasn’t been much in terms of progress" between the two sides as he prepares to hit the open market on Oct. 9.

"Well, what I’m being told is that there was a new offer made by the St. Louis Blues early last week," LeBrun said. "It’s an offer that didn’t move the needle from the Pietrangelo camp’s perspective. So, told not a whole lot of progress since then. And it’s not just about money here. Structure and bonuses are an issue here.

"Where this stands right now is, I think Alex Pietrangelo and his agents at Newport waiting for a new offer from the St. Louis Blues, which I suspect will come here over the next week or two."

The 30-year-old defenceman, who led the Blues in average ice time at 24:11 per game, is ranked No. 1 among TSN’s top pending players.

Pietrangelo had 16 goals and 52 points in 70 games during the regular season, adding one goal and six points in the NHL's Return to Play.