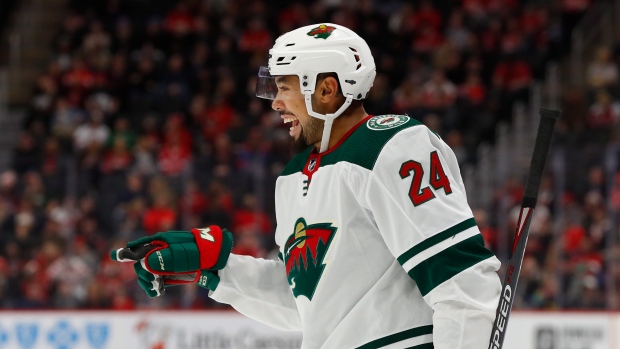 The Wild have been active on the trade market dealing Eric Staal for Marcus Johansson and acquiring Nick Bjugstad from the Penguins, but is another trade in the works for Matt Dumba? Another sought-after defenceman in Alex Pietrangelo is inching closer to free agency, what's the latest on his contract talks with the Blues? The TSN Hockey panel has more in Insider Trading.

Reda: Gentlemen, we knew teams currently not in the bubble would be allowed to make deals. And they are certainly moving bodies. Darren, How did this Johansson-Staal trade come together?

Dreger: Well, Bill Guerin, general manager for the Minnesota Wild, has vowed that he wants his team to be younger. And he has been very, very aggressive this week. Now, in Marcus Johansson he gets a little bit younger. Eric Staal is 35 years of age. Marcus Johansson is about to turn 30. There’s a financial discrepancy here. Johansson earns $4.5 million in 2020-21. Staal is at $3.25 (million). What’s interesting about this is it works out well from Buffalo’s perspective because they get a proven player in Eric Staal, who can mentor some of their young guys. But there’s a lot of reaction since the trade broke to what might happen next in Minnesota, given the fact that we know that Guerin has been on the hunt for a centreman.

LeBrun: Yeah and both players traded for each other today had a 10-team no-trade list. Ten teams that wouldn’t be traded to or had to waive. As it turns out, Buffalo was not on Eric Staal’s no list. And Minnesota was not on Marcus Johansson’s no list, either. So the trade caught both players by surprise. Now, you mentioned it, I think the Wild are far from done here.

Reda: Pierre, it’s been a couple of busy days for the Wild, as you mentioned. On Tuesday, they signed defenceman Jonas Brodin to a seven-year, $42 million contract extension. Many felt that opened the door for a Matt Dumba trade, as well. What’s your take on the Wild’s situation there?

LeBrun: Well here’s the interesting thing. I can tell you that teams are calling Minnesota on Dumba, already. I heard that from a couple of teams today. The Wild would like a top-six centre back. And [that] was before they traded Eric Staal. So that need is pretty pressing now. And the reason why Dumba is potentially in play is because of the expansion draft next year with Seattle. Jonas Brodin’s new deal has a no-move clause. Jared Spurgeon has a no-move (clause). Ryan Suter has a no-move (clause). You can do the math. Most teams don’t want to protect four defencemen in the expansion draft. Now, it doesn’t mean that Dumba has to be moved this off-season. Certainly the Wild could wait until the trade deadline next year before the expansion draft. Or protect four defencemen, which I don’t think is likely. The Winnipeg Jets, by the way, one of the [teams] I believe that have some interest in Dumba. But what they don’t have is a top-six centre to trade Minnesota.

Reda: Any news on Alex Pietrangelo?

LeBrun: Well, what I’m being told is that there was a new offer made by the St. Louis Blues early last week. It’s an offer that didn’t move the needle from the Pietrangelo camp’s perspective. So, told not a whole lot of progress since then. And it’s not just about money here. Structure and bonuses are an issue here. Where this stands right now is I think Alex Pietrangelo and his agents at Newport waiting for a new offer from the St. Louis Blues, which I suspect will come here over the next week or two.

Reda: Darren, with just days before the (Stanley) Cup Final beginning, the families of the players that are going to be involved could be in for some bad news?

Dreger: Well, it’s more about the American families or international families than it is about the Canadian families. Families in Canada will be allowed into the bubble. But from an American perspective, or again a European standpoint, it seems highly unlikely at this point that the Canadian government is going to allow those families (from a travel or quarantine standpoint) to come in. I can tell you this is highly disappointing from a player perspective because, as we know, the NHL and NHLPA almost promised. They made it part of the Return to Play protocol, but they have not been able to convince the Canadian government to this point.

Reda: And when the NHL is done with that bubble in Edmonton, maybe someone else can use that?

Dreger: Yeah, the IIHF is meeting this week and an announcement is expected either Thursday or Friday that will share the news that the World Juniors will in fact be held this year in the Edmonton hub. And the plan is to return to the traditional format in Red Deer, Alberta and Edmonton the year after.

Reda: Back to the NHL, the Arizona Coyotes are ready to roll out Bill Armstrong as their new general manager. And he’s going to have to hit the ground running.

LeBrun: Yeah, and it’s a deal that’s not done yet, Gino. I think it’s important to point that out as of right now on Tuesday that it is a deal that hasn’t been signed yet. But, it’s expected to be a five-year deal. There’s a verbal agreement in place. Look for an announcement on Wednesday. But when he hits the ground running, and I’m told that Bill Armstrong had a 90-page presentation for the Arizona ownership that really won them over. A five-year plan to get this team back on track. Well I can tell you this. I think some of that will be pressure to cut payroll there in Arizona.