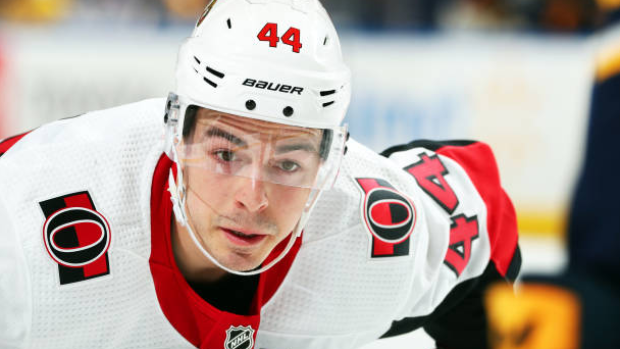 According to TSN Hockey Insider Pierre LeBrun, the Ottawa Senators are still expected to try to work out a contract extension with Jean-Gabriel Pageau before exploring the possibility of trading him.

If a deal cannot be reached, however, LeBrun adds that the Senators could set their asking price at a first-round pick in a seller's market for centres.

"I still think – as we all do here on the panel – that they’re going to try and sign him first. There haven’t really been any talks, by the way, not yet but there’s still time," LeBrun said Tuesday on Insider Trading. "Now if they can’t sign him that’s where it gets interesting. This is a thin market for centres among rental players. He is at the top of the list for that position and because of that, I think the original asking price from Ottawa will be a first-round pick.

"Now, it doesn’t mean they’re going to get it. I’ve talked to some teams that say, “Yeah, right” but maybe a conditional first-round pick like we saw in the last couple years where a second could become a first. Among the teams that I think have Pageau on their list, you’ve got Edmonton, you’ve got the Islanders, Philadelphia, maybe Calgary. You know what they have in common? They’re not sure of making the playoffs right now and that’s why I think they’ve got to be careful not to overpay for a guy like Pageau if they dive in."

Pageau, 27, has scored a career-high 20 goals and posted 32 points in 48 games with the Senators this season. He has a $3.1 million cap hit this season and will become an unrestricted free agent in July.

LeBrun wrote in The Athletic Wednesday that teams are less willing to part with first-round picks now than in the past, noting that contenders favour keeping their window open longer over an "all-in" mentality. He points to New York Rangers winger Chris Kreider as a player who could fetch a first-round pick, but wonders if the Rangers will have to settle instead for second- and third-round picks just as the Detroit Red Wings did with Gustav Nyquist last season.

Looking For a Push

Buffalo Sabres general manager Jason Botterill is continuing to look for offence to help boost his team's push for the playoffs.

Botterill acquired winger Michael Frolik from the Calgary Flames earlier this month, but said Tuesday he hopes to make more moves ahead of the deadline.

"We've been very honest from that standpoint," Botterill told NHL.com. "I think if we can add more to our sort of offensive mix, we're certainly looking for it. I think also when you can add to just our team speed up front, it's another thing you look at."

Jeff Skinner returned to the lineup on Tuesday after missing 10 games with an upper-body injury. The team could also get rookie Victor Olofsson back from his lower-body injury before the deadline.

"We are excited tonight to obviously get Jeff [Skinner] back in the lineup," Botterill said prior to Tuesday's 5-2 loss to the Ottawa Senators. "That's going to be a huge addition and now see if that mix of Skinner, [Marcus] Johansson, Frolik have chemistry as a line there."

Tuesday's loss dropped the Sabres to 22-21-7 on the season and the team now sits 10 points back of the Carolina Hurricanes for the final wild-card spot.

Zajac, who is signed through next season at a $5.75 million, acknowledged that there has been interest in him, but said he's not interested in being moved.

“I know there’s obviously teams calling. For me, it’s just … I want to be here,” Zajac said according to The Athletic. “I want to be in Jersey. I think we’ve got a good young group. Like I’ve said from the beginning, we’re going to mature and we’re going to be a really good team.

“I have had a meeting with Fitzy. I really believe in what he wants to do with this team and where he sees it going and what he feels my value and role are going forward. There’s a lot of things that go into it. I think I came out of (the meeting) even more wanting to be here. Part of it is we’ve got a good coaching staff right now. I feel like I’m a guy who can still be here and help the young guys, especially our two young centres who are going to be faces of the franchise for years to come. So, that’s where I’m at.”

The 34-year-old has spent his entire career with the Devils since being drafted 20th overall by the team in 2004 and is on pace to reach 1,000 career games with the franchise later this season. In 49 games, he has six goals and 19 points.

Greene, meanwhile, is in his 14th season with the Devils and fifth as team captain. He is currently playing out the final season of a five-year deal signed with the club in 2014 and appeared to be more open to a trade.

“So we’ve had, I don’t know how to say it, like just an initial talk,” Greene said of his conversation with Fitzgerald. “It wasn’t, ‘Will I do it?’ They didn’t ask me that. It was just, kind of, ‘These are some of the options.’ It’s going to be up to me because of the full no-trade. They have not asked me. We just got a cup of coffee and it wasn’t anything earth-shattering. I’ve been in the league a long time. I know the business side of it and how this works, so it wasn’t any surprises or anything like that.”

The 37-year-old has one goal and nine points in 45 games this season while averaging 20:02 of ice time per game. He added that the uncertainty around the Devils future could lead him to accept a move.

“It’s tough right now because there are so many factors that go into this, right?” Greene said. “Like, what if … who knows if Fitzy gets the GM job or someone else does? What if a new guy comes in and wants to do his thing, and you’re not part of that? That’s fine. That’s his right. That’s his job. At the same time, you don’t want to be sitting here and not knowing what is going to happen. It’s a unique situation. There’s a lot of factors, so you have to prepare and if a decision does have to be made, you know it isn’t just a spur of the moment thing.”