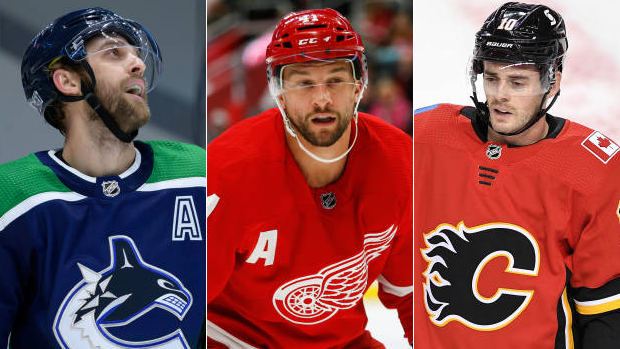 Fighting for first place in the North Division, TSN Senior Hockey Reporter Frank Seravalli says the Edmonton Oilers have decided on the piece they're looking to acquire to boost their chances.

"It might not be splashy but I think the Edmonton Oilers have their eye on a very specific piece at a very specific price. That’s a right shot centre who can take faceoffs, and win them on the penalty kill where they’ve struggled this year, just 42 per cent shorthanded that can help their kill," Seravalli said on Insider Trading Thursday. "So who fits that bill? Well how about Luke Glendening who’s not coming back to the Detroit Red Wings.

"He’s the guy that leads the league in faceoff percentage this season, can also kill penalties and has a cheap cap hit. There’s two other guys that don’t require a seven-day quarantine and that would be Vancouver’s Brandon Sutter and Calgary’s Derek Ryan, although they have higher caps hits, more cap gymnastics there.

"And the price? Well the Oilers have traded their second, third and fifth-round picks, so they’d like to do all that for a fourth-round pick if they can. We’ll see what kind of magic Ken Holland has up his sleeve."

Glendening, 31, is listed at No. 14 on the latest TSN Trade Bait board, carrying a cap hit of $1.8 million. The Detroit Red Wings veteran has three goals and nine points in 32 games this season.

Sutter has six goals and eight points in 35 games with the Canucks this season. The 32-year-old carries a $4.375 million cap hit in the final season of his current deal.

Kevin Kurz of The Athletic wondered Thursday if the Oilers could pursue San Jose Sharks veteran Patrick Marleau, having shown interest in the 41-year-old last season. Marleau said earlier this week he won't seek a trade, but would consider a move to a contender.

One market I wonder about regarding Patrick Marleau is Edmonton. The Oilers were interested in Marleau last season before he ended up in Pittsburgh. Might they circle back now?

While there has been fear that a myriad of issues specific to this season could lead to a quiet trade deadline, Pittsburgh Penguins president of hockey operations Brian Burke is expecting business as usual ahead of April 12.

Burke pointed to the Colorado Avalanche acquiring goaltender Jonas Johansson from the Buffalo Sabres over the weekend as a sign the market is starting to heat up ahead of a busy deadline.

“I really do,” Burke told The Athletic on Wednesday. “Colorado just picked up a goalie. So that’s one of the first moves. More will come. Listen, it’s human nature. If you think you’re close, if you think your team can win, you’re going to make a move. I heard a guy on NHL radio today - and it’s a guy I respect - saying that he doesn’t think there will be much activity. I respect him, but I disagree. There will be lots of movement. I really believe that. I’ve been there. When you think you’re close, you’re going to make a move.

"I told (general manager Ron Hextall) the other day that things have changed so much since I was a rookie general manager. Back then, only five or six teams would make moves if they thought they could win the Cup. Now, teams make moves just to get into the playoffs. So, there will be moves.”

The Penguins currently sit third in the East Division, four points back of the New York Islanders and first and Burke said the team is looking to make a move ahead of the deadline.

“We like our group,” Burke said. “We’d like to make it better. Here’s the thing. We don’t have any picks left. We aren’t putting our top kids in play. So, we don’t necessarily have certain things to offer that other teams do. The things we can offer are a little different than other teams, maybe.

TSN Hockey Insider Pierre LeBrun reports contract negotiations between the New Jersey Devils and pending unrestricted free agent Kyle Palmieri have not been progressing, increasing the likelihood the No. 10 name on the Trade Bait board gets dealt.

"And onto a prominent name from your trade board, Frank, and that’s Kyle Palmieri," LeBrun said on Insider Trading Thursday. "Before we know he’s definitely getting dealt, we have to know that he’s not getting signed, he’s a pending UFA. The Devils have had talks recently with his camp and both sides I’m told struggling to find what is common ground on a contract in this flat cap environment and so much uncertainty of what contracts are going to look like moving forward.

"Things can change but all things being equal, more likely that Palmieri gets dealt before April 12."

Palmieri, 30, has six goals and 15 points in 30 games with the Devils this season after topping the 20-goal mark in each of the previous five years.

A first-round pick of the Anaheim Ducks in 2009, Palmieri carries a cap hit of $4.65 million in the final season of the five-year deal he signed with the Devils in 2016.