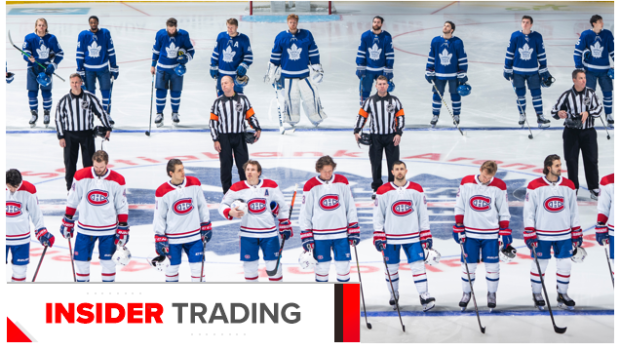 Now that the federal government is expected to approve a seven-day quarantine for NHL players from American-based teams traded to Canadian-based teams, what will the repercussions be? What is atop Edmonton's wish list as the trade deadline approaches? Will the NHL Draft return to normal this year? TSN Hockey Insiders Darren Dreger, Pierre LeBrun and Frank Seravalli discuss this and more.

James Duthie: Your Insiders are Dregs, Pierre and Frank. Good news for Canadian NHL teams and anyone with a vested interest in there being actual trades on TradeCentre, not to name any names. The federal government poised to reduce the mandatory 14-day quarantine for players traded to Canadian clubs down to seven. What are the repercussions Dregs?

Dreger: Well, I mean you’ve got seven happy Canadian general managers to go along with Canadian media, no question about that. The approval is expected to mimic the national interest exemption which was afforded to the seven Canadian teams prior to training camp. Now, the seven-day quarantine isn’t an issue because the National Hockey League tests daily so that’s not going to be a problem. What it does though is pretty obvious. It now gives the Canadian general managers more time to navigate through to the April 12 trade deadline. But when the news broke earlier in the day, one general manager noted ‘look, I don’t think there’s been a single trade that’s been held up to this point because of the quarantine issues and the restrictions in Canada.’

Duthie: But if the market does swing a little more open to the Canadian clubs, let’s look at the Edmonton Oilers. What might be at the top of their priority list Frank?

Seravalli:  Well James, it might not be splashy but I think the Edmonton Oilers have their eye on a very specific piece at a very specific price. That’s a right shot centre who can take faceoffs, and win them on the penalty kill where they’ve struggled this year, just 42 per cent shorthanded that can help their kill. So who fits that bill? Well how about Luke Glendening who’s not coming back to the Detroit Red Wings. He’s the guy that leads the league in faceoff percentage this season, can also kill penalties and has a cheap cap hit. There’s two other guys that don’t require a seven-day quarantine and that would be Vancouver’s Brandon Sutter and Calgary’s Derek Ryan, although they have higher caps hits, more cap gymnastics there. And the price? Well the Oilers have traded their second, third and fifth-round picks so they’d like to do all that for a fourth-round pick if they can. We’ll see what kind of magic Ken Holland has up his sleeve.

Palmieri not close to re-signing

LeBrun: And onto a prominent name from your trade board, Frank, and that’s Kyle Palmieri. Before we know he’s definitely getting dealt, we have to know that he’s not getting signed, he’s a pending UFA. The Devils have had talks recently with his camp and both sides I’m told struggling to find what is common ground on a contract in this flat cap environment and so much uncertainty of what contracts are going to look like moving forward. Things can change but all things being equal, more likely that Palmieri gets dealt before April 12.

Duthie: Pierre, the North Division’s first real schedule headache this season with the Habs’ games being cancelled this week, implications for the Oilers and for the Senators, but the NHL has figured it out?

LeBrun: Yeah so the NHL has sent in the dates to, especially the two teams that are involved, Edmonton and Montreal. Ken Holland and Marc Bergevin have the rescheduled games in front of them, they have the matrix. But the NHL wants to wait before announcing and making that official because of course they want to wait until Montreal gets the full go, the full clear here in their COVID situation so we may not hear about it for a while. In the meantime, as it stands now, if Montreal gets back to playing next Tuesday against Ottawa, the reschedule for the North Division sees a game or two on May 11, which is the latest the schedule maker has gone so far in his make-up games. It means the playoffs could still start by the 13th so that’s not too much of a delay.

Duthie: With the COVID variants and the pace of vaccine, it’s hard to know where we’ll be in a few weeks, let alone a few months. But any idea what the draft, now that we know what will happen, will look like Frank?

Seravalli: Yeah James, the NHL plans to conduct it virtually once again but that’s with all 32 teams, including Seattle, operating from their own war rooms in their home cities. But they’d like to do something special, perhaps from a centralized site, maybe even outdoors, who knows, to get the top prospects there and make it a day that they’ll remember with the NHL brass, but all teams in their home cities.

Dreger: Well and look, now that the draft has been determined and it’s staying in July, the National Hockey League wants to take a better look at a prospects event and this is interesting. It could happen in early July, the logistics are just being talked about. With all the restrictions, it’ll be in Canada, but is it Toronto? Nobody really knows. But it will combine some things. It’ll have a combine type of event and they’ll also potentially have a three team round robin as part of it as well. It’s all the top draft eligibles working together but a lot to comb through at this stage.

Duthie: Sympathy for the prospects, many of whom haven’t even played and sympathy for the scouts who have to make these big decisions without seeing much from these players.