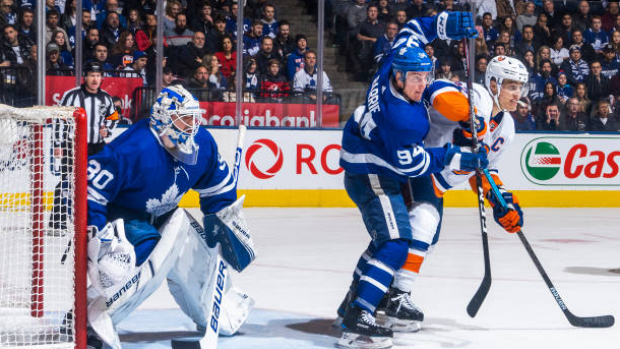 The Toronto Maple Leafs enter their bye week having lost five of their previous six games and Terry Koshan of The Toronto Sun argues general manager Kyle Dubas must have "a defenceman of some calibre has to be in his sights" to help his struggling team push for the playoffs.

Koshan points to Sami Vatanen of  New Jersey Devils, San Jose Sharks blueliner Brenden Dillon and Chicago Blackhawks defenceman Erik Gustafsson as rental options ahead of the deadline, though Dubas has previously stated he prefers acquiring players with term. Dubas traded for Jake Muzzin last season and the team could get some relief as soon as their next game on Jan. 27 if Muzzin's fractured foot is healed.

The Maple Leafs are currently without Muzzin and defenceman Morgan Rielly, who will be sidelined into March with a fractured foot. Toronto slipped out of the playoff picture over the weekend, though they remained tied in points for third place in the Atlantic with the Florida Panthers, who have two games in hand.

Koshan notes that the Maple Leafs could also target a backup goaltender ahead of the deadline, but believes improving their defensive play is Toronto's best path to the playoffs.

Ilya Kovalchuk is off to a red-hot start with the Montreal Canadiens, posting four goals and eight points in eight games since joining the team earlier this month.

Columnist Jack Todd of The Montreal Gazette believes the 36-year-old Kovalchuk has already proven he has plenty left and general manager Marc Bergevin should sign him to an extension now.

Todd argues that trading Kovalchuk, even if there's hope to re-sign him in July, would be a mistake for the Canadiens. Tood notes that keeping Kovalchuk may not be enough to propel the Canadiens to the playoffs this season, but he could help them contend over the next two seasons while their window remains open with Shea Weber and Carey Price.

Kovalchuk joined the Canadiens earlier this month on  a one-year, two-way contract that pays him $700,000 in the NHL. He became a free agent in December when the Los Angeles Kings terminated his contract. He has seven goals and 17 points in 25 games this season and eight points in eight games with Montreal.

Back in the Draft?

The San Jose Sharks are currently without a first-round pick in this year's draft, having traded their selection last season to acquire Erik Karlsson from the Ottawa Senators.

According to Bruce Garrioch of the Ottawa Sun, Sharks general manager Doug Wilson is going to try to acquire a first-round pick before the deadline to help his struggling team build for the future. The Sharks currently sit sixth last in the NHL and are expected to be sellers at the deadline.

Garrioch notes, however, that none of the Sharks' pending unrestricted free agents are expected to draw a first-round pick return, and Wilson will have to consider moving a bigger piece to acquire one. He reports that teams are expected to inquire on Timo Meier, Tomas Hertl and Brent Burns.

The Sharks, who fired head coach Peter DeBoer and replaced him with Bob Boughner, are currently on pace to miss the postseason for just the second time since 2003.

Larry Brooks of The New York Post believes New York Rangers winger Pavel Buchnevich could be on the trade block ahead of the deadline if the team continues to sit outside the playoff picture.

Buchnevich has seven goals and 25 points in 47 games this season, but has scored just two goals and a total a six points in his last 23 games. As Brooks notes, the 24-year-old slipped down to the fourth line in Sunday's 2-1 loss the Columbus Blue Jackets, who sit in the top wild-card spot with 60 points in 50 games.

“I didn’t think he had it tonight,” Rangers head coach David Quinn said of Buchnevich post-game.

The Rangers sit nine points back of a playoff spot - they have three games in hand over the Blue Jackets and two games in hand over the Carolina Hurricanes, who hold the second wild-card spot with 59 points - and Brooks points to Chris Kreider, Ryan Strome, Anthony DeAngelo and Alexandar Georgiev as players who could become available over the next month.