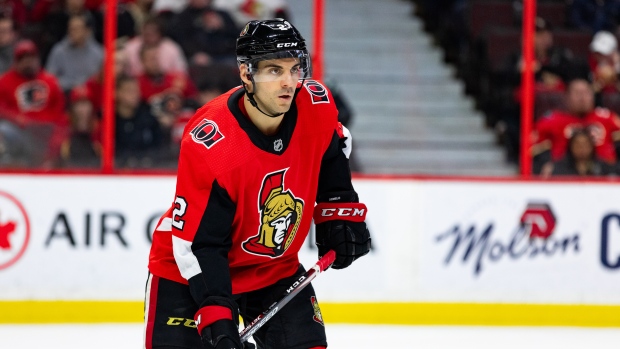 The Florida Panthers are looking to add a defenceman and a backup goal ahead of the trade deadline and Bruce Garrioch of the Ottawa Sun is hearing Panthers general manager Dave Tallon might have some interest in Ottawa Senators blueliner Dylan DeMelo.

The 26-year-old DeMelo, who is slated to become an unrestricted free agent on July 1, has seven assists over 38 games this season with the Sens, his second in the nation's capital.

Florida currently holds the third playoff spot in the Atlantic Division, four points ahead of the Toronto Maple Leafs.

Garrioch notes the Carolina Hurricanes are another team that could be interested in acquiring DeMelo.

In other Senators news, Garrioch says forward Jean-Gabriel Pageau will garner plenty of interest (upwards of 15 or more teams) around the league if Ottawa makes him available ahead of the trade deadline. Pageau will also become a UFA on July 1 if not signed to a new contract. The Sens will talk to Pageau about the possibility of an extension before putting him on the trade block where the likely asking price would be a first-round pick and a prospect, says Garrioch.

The New Jersey Devils are tied for the second worst record in the NHL and are ready to start selling in preparation for the future.

According to Garrioch, interim general manager Tom Fitzgerald would like to move some of the pending UFAs on the roster, including veteran defencemen Andy Greene and Sami Vatanen as well as forwards Wayne Simmonds and Kyle Palmieri.

This has not been the case as New Jersey has struggled since the start of the season, leading to superstar Taylor Hall being moved to the Arizona Coyotes in mid-December followed by the firing of general manager Ray Shero less than a month later.

Finally, Garrioch reports that both the Winnipeg Jets and New York Islanders have been making calls around looking for help on the blue line.

Winnipeg are currently three points out of the second and final Wild Card spot in the Western Conference while the New York Islanders sit third in the Metropolitan Division.