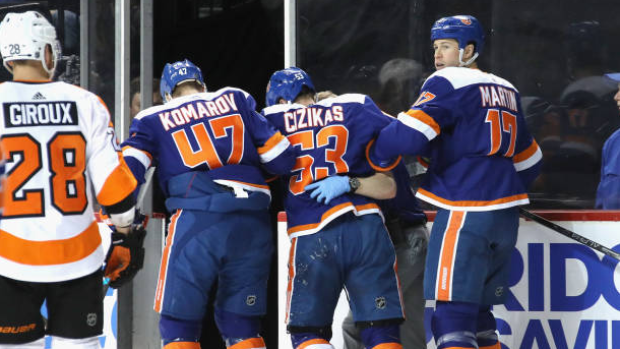 With injuries piling up for the New York Islanders, Arthur Staple of The Athletic believes general manager Lou Lamoriello will have a higher sense of urgency to make a move before Feb. 24.

Casey Cizikas became the latest Islander to join the injured this week when he was ruled out for three-to-four weeks after suffering a cut on his leg from a skate. The Isles were already without fellow penalty-killer Cal Clutterbuck and defenceman Adam Pelech and Staple believes the team should look to acquire a defensive-minded forward to help head coach Barry Trotz fill the void.

Staple points to Ottawa Senators pending UFA Jean-Gabriel Pageau as a potential option, but isn't sure whether the Islanders are willing to part with a first-round pick to acquire him. He adds that Anaheim Ducks centre Derek Grant could be a cheaper option for the Islanders, along with New Jersey Devils veteran Travis Zajac, Los Angeles Kings forward Trevor Lewis or Detroit Red Wings centre Luke Glendening.

Zajac, meanwhile, carries a $5.75 million cap hit and is signed through next season on the eight-year deal he signed with the Devils in 2013 - when Lamoriello was the team's general manager. The 34-year-old has six goals and 20 points in 55 games this season.

Lewis, 33, is also a pending unrestricted free agent and carries a $2 million cap hit. He has three goals and nine points in 44 games this season.

Glendening has six goals and nine points in 47 games with the Red Wings this season. He's signed through next season at a $1.8 million cap hit.

Cap space is not expected to be an issue for the Islanders, as the team has $5.1 million in space ahead of the deadline, according to CapFriendly.

Dallas Stars general manager Jim Nill appears content to stand pat at the deadline with his team currently sitting third in the Central Division with a six-point cushion on a playoff spot.

"We're very comfortable where we're at," Nill told NHL.com on Wednesday. "I like the way the young kids are developing. I like our depth.

"Now, is that going to change or am I going to get a call from a GM with a hockey trade that might make sense? I'm always going to look at that. But I'm not in a situation where I've got to make a move for the sake of making a move."

Nill acquired winger Mats Zuccarello from the New York Rangers ahead of the deadline last season, giving up a a second-round pick and a 2020 third-rounder in the process. He also dealt the team's second-round pick in this year's draft back in 2017 to acquire defenceman Marc Methot from the Vegas Golden Knights, meaning the team has only their first-round selection in the first 93 picks of June's draft.

"I think we'd all like to be buyers, but I have to run a hockey department, too," Nill said. "Last year, I gave away, well, I have no second- or third-round pick this year because of decisions I made last year in trades.

"You're always thinking both short term and long term, and I have to make those decisions. Right now, for me to make up more picks and that, I have to think about this franchise too."

In addition to adding Zuccarello, Nill also traded Connor Carrick and a third-round pick to acquire defenceman Ben Lovejoy at last year's deadline. Nill said Wednesday he's more content with the state of his team this season, but admitted his plans could still change if the team is hit by injuries over the next 11 days.

"Definitely. Sure, we're going to watch the next two weeks as the deadline approaches. Hopefully, we stay healthy. If something happens, I might have to act," he said. "But right now, I like our depth. I like the way we're playing. Would I like to add something? We all would. If there's something that comes out of nowhere and makes sense, yes, we'll look at it. But it's not something I have to do. So we're going to analyze our team, analyze our market, and go from there.

"But I'm definitely fine and encouraged by our team if we stand pat."

Who's On the Move?

The New Jersey Devils are expected to be sellers ahead of the deadline and Chris Ryan of NJ.com believes defenceman Sami Vatanen is the most likely player to be on the move before Feb. 24.

Vatanen, 28, is a pending unrestricted free agent and carries a $4.875 million cap hit this season. He has five goals and 23 points in 47 games this season, having missed the team's past four games due to a lower-body injury.

Ryan believes it's less of a certainty the team will move fellow pending UFAs Andy Greene, Wayne Simmonds, Kevin Rooney and goaltender Louis Domingue. He notes that none of the four are likely to command more than a mid-round pick and the Devils could ultimately decide to hang onto them for the remainder of the year.

As for forwards Blake Coleman and Kyle Palmieri, who have been involved in trade speculation with one year each left on their deals, Ryan believes the Devils would need to be blown away to accept a trade for either. Ryan adds that he doesn't believe centre Travis Zajac is going anywhere since the veteran has already stated his desire to stay in New Jersey and owns a full no-trade clause.

The Devils currently sit third-last in the Eastern Conference, 19 points back of the Philadelphia Flyers for the final wild-card spot.