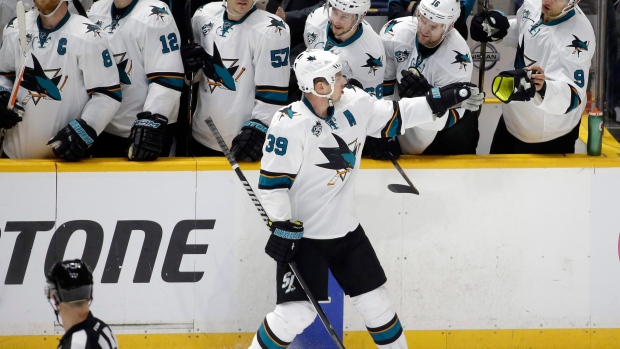 NASHVILLE, Tenn. - A two-goal deficit in the third period wasn't too much to overcome for one of the NHL's best road teams.

Logan Couture scored the only goal of the shootout to lead the San Jose Sharks to a 3-2 comeback victory over the Nashville Predators on Saturday night.

Tomas Hertl scored a pair of third-period goals and Joe Thornton assisted on both for San Jose, winners of three of four.

"We take pride in wanting to finish with the best road record in the league," San Jose coach Peter DeBoer said. "It was a gritty effort. Early on, they had a couple of seeing-eye goals. We could've chalked it up to one of those nights, but we hung in there and the third period was our best."

Shea Weber and Calle Jarnkrok had the goals for the playoff-bound Predators, who have lost four straight. Despite the skid, Nashville clinched its second consecutive playoff berth Friday night when the Washington Capitals defeated the Colorado Avalanche in regulation.

In the shootout, Couture slipped a quick wrist shot from the slot between Carter Hutton's pads. Hutton had 38 saves in regulation and overtime.

"He was really good," Nashville coach Peter Laviolette said of Hutton. "He had a lot of work, a lot of pucks at him, and way too much time at our end. There was a lot of pucks, a lot of redirects, a lot of things that were tough for him to save."

Weber scored the game's first goal at 8:07 of the opening period. From the right boards, Mike Ribeiro sent a pass to Weber, who was coming down from the right point. Weber stepped into a one-timer and beat James Reimer high to the stick side just underneath the crossbar.

Reimer finished with 28 saves and denied all three Nashville attempts in the shootout.

Ryan Johansen appeared to make it 2-0 as time expired in the first period, but his shot, which was called a goal on the ice, was overturned on video review as not having completely crossed the goal line before the clock hit all zeros.

"I knew it was close to being the end of the period, but it wasn't in the back of my mind," Reimer said. "When they scored, I looked up and was expecting there to be a couple of seconds left. But then I saw none and you saw them take a while, so you knew it was close. I was happy with the break."

Jarnkrok did make it 2-0 at 1:38 of the second when he redirected James Neal's shot from the high slot between Reimer's pads.

Hertl cut Nashville's lead in half at 2:19 of the third. The goal was Hertl's 20th of the season, the fifth Sharks player to hit that mark this season.

"Yeah, it was a pretty big game for us because it was a little bit like the playoffs for us," Hertl said. "It was important to come back, because maybe sometimes in the playoffs, you need this game, you are losing. You know, play good first period, come back and play really hard in the second and finish in the third."

Hertl then tied it at 10:31 of the third when he redirected Brent Burns' slap shot by Hutton.

"They're a good team, they played pretty well," Johansen said. "Two tough bounces for us, but that's the way it goes sometimes against good teams. We just have to be able to play a better third period."

NOTES: Nashville is 26-1-4 when leading after two periods this season. ... Johansen has recorded at least one point in his last four games played against the Sharks. ... Thornton has 57 points in 48 career games played against Nashville. ... San Jose C Joe Pavelski had one assist in the game, his 40th of the season. It is the second time in his career he recorded 40 assists.