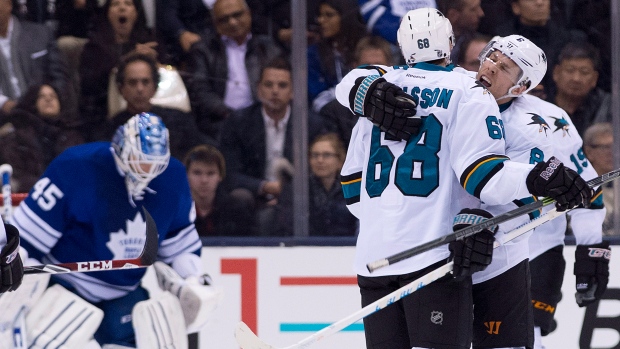 TORONTO - The Toronto Maple Leafs simply weren't in the same league as the San Jose Sharks on Thursday.

Logan Couture had a goal and an assist as San Jose dismantled the Maple Leafs 4-1, Toronto's fourth straight loss and seventh in its last eight games.

"We're probably a junior team against an NHL team tonight," said starting goaltender Jonathan Bernier. "I don't know how many times we're going to talk about having a good start and we just don't do it."

Bernier's 38-save performance was one of the few highlights of the Leafs' (27-39-6) night. Jake Gardiner was the lone Toronto scorer.

Couture's goal early in the second period was the eventual winner for San Jose (35-28-8), which ended a two-game skid. Tomas Hertl, Melker Karlsson and Tommy Wingels also scored for the Sharks, as Antti Niemi made 27 saves for the win.

Joe Thornton had two helpers for San Jose, reaching the 900-assist mark on his career.

"It was like a pro team playing a non-pro team," said Horachek. "We were outclassed, outworked, outskated, outhit.

"I'm not sure outhit. They didn't have to (hit). They had the puck the whole time. It wasn't good."

Hertl opened the scoring for the Sharks at the 7:01 mark of the first on a costly turnover by the Leafs. An errant Toronto pass went deep into the defensive zone thanks to a line-change mixup. Chris Tierney beat a defenceman to the puck, skated behind the net and fed Hertl for the easy deflection past Bernier.

San Jose dominated play in the first, outshooting the Leafs 21-8. Horachek said he spoke to the team in the locker-room during the first intermission.

"We've talked about the way we want to play and how we know that 10 of the last 15 games we've been behind after the first period and we've chased the game," said Horachek. "If you don't have the courage or the character to be able to understand that that's the most important thing, to be ready to play and pushing, then there's a problem."

Couture scored an impressive power-play goal to give the Sharks a 2-0 lead early in the second. Standing in front of Bernier's crease, he corralled a pass from Thornton, put it on his forehand and into the net while two Toronto defenders checked him.

Gardiner wired a wrist shot from near the blue-line past Niemi at the 8:54 mark of the second to make it 2-1. Niemi was screened by a cluster of Sharks defenders trying to cover Richard Panik in the slot.

Thornton continued to dismantle the Leafs defence, feeding Karlsson from behind the net. Bernier stood no chance on the play, as Karlsson was completely unmarked.

"You've just got to take it day by day to be honest with you," said Thornton of the Sharks' push for the playoffs. "You can't look too far ahead and you're definitely not looking behind you. You've just got to stay in the moment. Enjoy this, but get ready tomorrow and then get ready for the next day, but just keep it in 24-hour segments.

Niemi made a spectacular blocker save near the midway point of the second, sliding from his left post to the centre of the crease to knock away a shot from Andrew MacWilliam in the slot.

San Jose made it 4-1 with six seconds left in the second as Matt Nieto lobbed a slow wrist shot from the faceoff circle that was deflected by Wingels over Bernier's left shoulder.

"They got a lucky goal on the fourth one there, five seconds left in the second period," said Bernier. "That really changed the momentum for us."