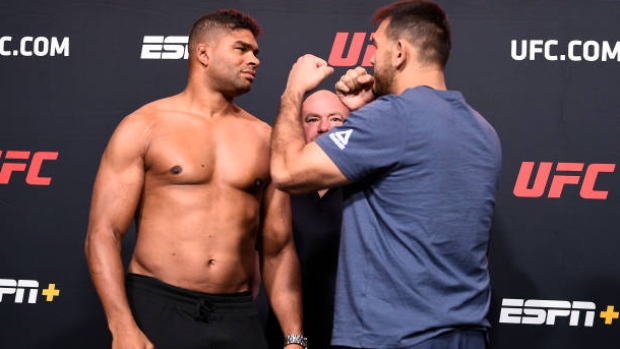 LAS VEGAS — The UFC is staging a fight show with just seven bouts after a series of cancellations related to positive COVID-19 tests.

The mixed martial arts promotion held its shortest card since 2005 on Saturday night after cancelling two bouts at late notice.

Heavyweight Marcos Rogério De Lima's bout against Alexander Romanov was scrapped about 90 minutes before the first fight at the UFC Apex gym on the promotion's corporate campus in Las Vegas. The UFC also cancelled a bout between lightweights Thiago Moisés and Jalin Turner.

In a third move, Kevin Natividad was removed from his featherweight bout against Brian Kelleher “as a precaution,” according to a UFC statement. Kelleher instead fought Ray Rodriguez on short notice.

The UFC returned to action May 9 after an eight-week pause for the coronavirus pandemic. The promotion has held near-weekly cards ever since, and it had incurred only sporadic cancellations due to COVID-19 problems while stringently testing its athletes.

But at least one bout has been scrapped on fight night from each of the UFC's past three cards due to COVID-19 problems.

Sijara Eubanks was scheduled to fight Karol Rosa, who was pulled from the card Thursday due to medical complications from her weight cut. Rosa was a late replacement for Macy Chiasson, who also pulled out of the bout for medical reasons.

Eubanks will meet a third opponent, Julia Avila, next week in Las Vegas.

Another bout scheduled for Saturday night between bantamweights Kelleher and Ricky Simón was cancelled last week after one of Simón's cornermen tested positive for COVID-19, according to Simón.