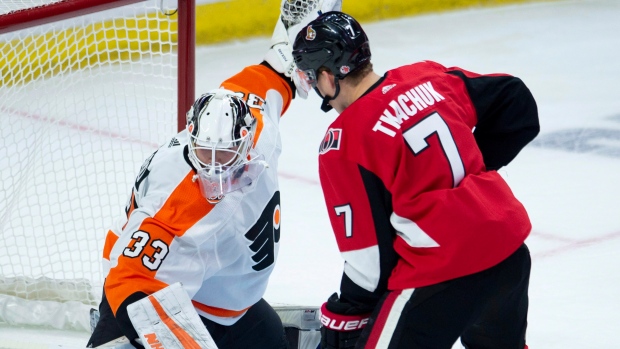 The Arizona Coyotes have claimed goaltender Calvin Pickard off of waivers from the Philadelphia Flyers.

Pickard was waived for the second time this year on Wednesday, having been claimed  by the Flyers off of waivers from the Toronto Maple Leafs prior to the start of the season.

The Coyotes were in need of a backup behind starter Antti Raanta after placing Darcy Kuemper on injured reserve on Tuesday.

Pickard had a 21-9-1 record in the AHL last season while playing with the Toronto Marlies and posted a .918 save percentage with a 2.31 GAA.

He started a career-high 50 games with the Colorado Avalanche in 2016-17 before being selected by the Vegas Golden Knights in their expansion draft. He was traded to the Maple Leafs last fall for a sixth-round draft pick.