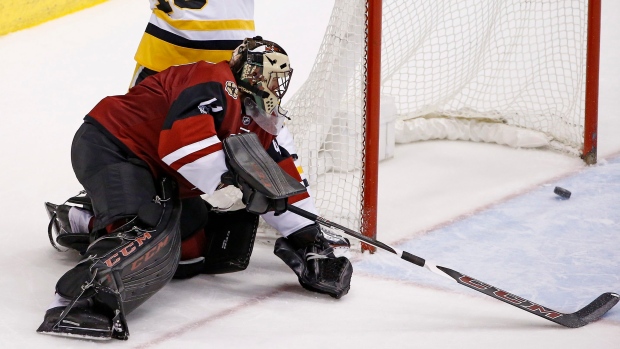 Arizona Coyotes goaltender Mike Smith was not happy in the comfort of his home arena on Saturday despite a 4-3 overtime win over the Pittsburgh Penguins.

With the game at 3-1 in favour of the Coyotes in the third period, Smith was the victim of a puck-handling error that allowed Josh Archibald to put the visitors within one with less than six minutes to play.

The shorthanded Penguins dumped the puck into the Coyotes end, allowing Smith to track the puck to start a breakout pass with the man advantage. The puck bounced off the boards but didn’t have the steam to get out of the unplayable area to the right of Smith’s net. The puck died at the edge of the trapezoid and Smith froze. Archibald pressured Smith into a whiff and pounded the puck into the open net.

After the game, Smith was unhappy with the movement of the puck as a result of what he considers poor ice conditions at Gila River Arena.

“You can’t play on that [ice],” Smith said, as quoted by the Arizona Republic. “When you got other teams coming in complaining about it on the ice, we have to skate on that all the time. It’s not an excuse, but it’s something that has to get better. It’s like slush out there. That puck was going to come out of the trapezoid, and then it just ended up stopping dead right on the line. I didn’t know know if I could play it or not on the line, so I kind of panicked for a second and then after I got control of it, obviously the rest is history.”

“That play can’t happen. I understand that, but that ice is a joke.”

The Penguins went on to tie the game with 14.2 seconds left to play and send the contest to overtime.

Smith stopped 28 of 31 shots and defenceman Connor Murphy was the overtime hero with the game-winning goal with 22 seconds left in the extra frame.