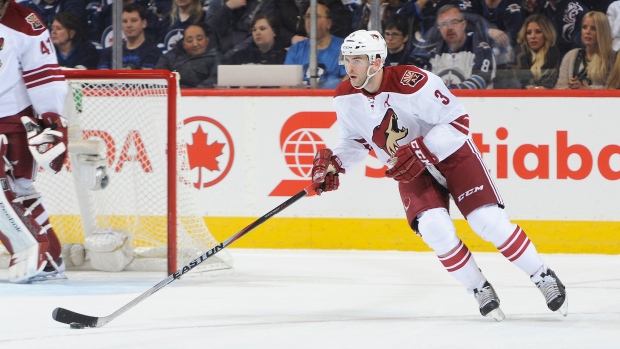 GLENDALE, Ariz. - The New York Rangers acquired a big piece in their push for another deep playoff run, picking up All-Star defenceman Keith Yandle in a trade with the Arizona Coyotes on Sunday.

The Rangers lost to the Los Angeles Kings in the Stanley Cup Finals last season didn't wait until Monday's trade deadline to make a big move for this year's run.

The 28-year-old Yandle has been one of the NHL's best offensive-minded defencemen, a four-time All-Star who has led the Coyotes in scoring the past three seasons. He has 41 points in 63 games this season and has been the anchor of Arizona's power play unit.

The Rangers made another deal ahead of the trade deadline, acquiring forward Carl Klingberg from the Winnipeg Jets for forward Lee Stempniak.

Arizona agreed to retain 50 per cent of Yandle's salary to complete the deal.

"It's very simple: The only way we could do a deal with the Rangers given their cap situation was to retain salary," Coyotes general manager Don Maloney said. "That's the reality of the world we're living in. We would not be doing this type of deal if we were acquiring a 33-year-old player, but when you talk about a 19-year-old potential first-line winger and a couple of other high-draft pick assets, you realize it's going to cost you some money to make this type of deal."

The Rangers are third in the Eastern Conference, five points behind Montreal, and two behind the neighbouring Islanders in the Metropolitan Division.

The 28-year-old Yandle has been a core member of the Coyotes since they drafted him in the fourth round of the 2005 draft. An assistant captain in Arizona, he has been the subject of trade rumours for the last several seasons and was finally moved with a year remaining on a five-year, $26 million contract signed in 2011.

The struggling Coyotes were expected to be sellers at the trade deadline as they rebuild during one of the worst seasons in franchise history. Arizona, 13th in the Western Conference with 47 points, traded centre Antoine Vermette to Chicago on Saturday for a 2015 first-round pick and defensive prospect Klas Dahlbeck.

"We're resetting this team," Maloney. "We're gaining assets that in 3, 4, 5 years will put us in position to win the Stanley Cup."

The 24-year-old Moore should give the Coyotes depth on the blue line. He was the 21st overall pick in the 2009 draft and had a career-best season in 2013-14, with four goals and 11 assists. Moore has a goal and five assists in 38 games this season.

The big piece of the deal for the Coyotes was Duclair.

The 19-year-old left wing was a third-round pick in 2013 and already has NHL experience, scoring a goal with six assists in 18 games with the Rangers this season. He also has nine goals and 16 assists in 20 games with Quebec of the QMJHL.

The Coyotes are hoping he can help set a foundation for the future with Max Domi, the 12th overall draft pick in 2013 who is expected to have a big impact next season. He and Duclair played on a line together for the gold-medal Canadian team in the 2015 World Junior Championships.

"Going into this reset, it's hard to get top young skilled players," Maloney said. "You have to give to get."