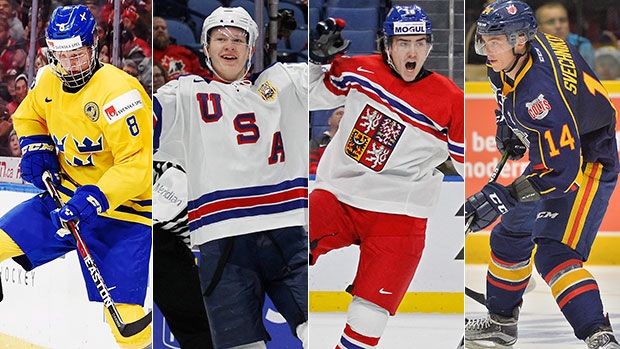 Fresh off an impressive performance at the World Junior Hockey Championship, Frolunda defenceman Rasmus Dahlin remains atop the prospect pile in the January edition of Craig’s List ahead of the 2018 NHL Draft.

Dahlin won’t have a challenger to his status as the No. 1 overall pick in the 2018 NHL draft. Last season we saw Nico Hischier use the World Juniors as a springboard to being the top selection at the entry draft. Dahlin, who had six assists and a plus-7 rating in seven games to help Sweden win silver in Buffalo, will do the same.

He is a franchise-defining defenceman with an unprecedented ability to control the game in all areas. The last blueliner I saw with that capability at this age was Victor Hedman. Dahlin joins another first- overall pick in the NHL draft, Gord Kluzak (1982), as the only 17-year-olds to be selected as the best defenceman at the World Juniors.

Dahlin remains one spot ahead of fellow Swedish blueliner Adam Boqvist, who plays for Brynas IF, in my rankings. Boqvist’s resemblance to Ottawa Senators captain Erik Karlsson is marked. The high skill, brilliant creativity and daring that allow Karlsson to command a game and capture the attention of his audience are present in Boqvist’s game.

Three wingers round out the top five. Boston University left wing Brady Tkachuk, who had three goals and six assists in seven games to help Team USA win bronze in Buffalo, moves up one spot from our November rankings to sit at No. 3.

Tkachuk manages to put himself in the thick of every significant play. While there is much talk about his intangibles, his intelligence, savvy puck skills, physical presence and ability to make others better are all qualities NHL teams covet.

He flips spots with Barrie Colts right wing Andrei Svechnikov, who had five assists in five games for Russia at the World Juniors. Svechnikov missed as significant portion of the first half of the OHL season with a hand injury, but still has 15 goals and eight assists in 18 games with the Colts this season.

Svechnikov has a game that reminds me of Marian Hossa. He’s an excellent scorer and a strong playmaker. He’s also smart, quick to recognize opportunity and is comfortable playing in tight areas and in traffic.

Halifax Mooseheads right wing Filip Zadina, who had seven goals in seven games for the Czech Republic in Buffalo, remains at No. 5. Zadina sits second in the QMJHL scoring race, with 48 points (25 goals, 23 assists) in 33 games.

Zadina is a determined and hungry scorer. He has the ability to score in multiple ways between the dots and from the top of the circles in the offensive zone. He possesses an excellent release that makes it very hard for goalies to get a read on his shot.

Sault Ste. Marie Greyhounds centre Barrett Hayton jumps three spots to No. 6 as the highest-rated Canadian in my rankings. The Peterborough, Ont., native has 39 points (16 goals, 23 assists in 39 games) for a squad that just had a 23-game win streak snapped last week.

Hayton can play and contribute in all situations. He reminds me of Boston Bruins star Patrice Bergeron in the sense of being complete, strong and able to produce whatever play is necessary to win. Like Bergeron, there’s not a lot of flash to his game, but winning teams will always value players with Hayton’s skills.

A trio of American players occupies the next three spots - defenceman Quinn Hughes from the University of Michigan at No. 7, USA Hockey National Team Development Program defenceman Bode Wilde at No. 8 and USA NTDP centre Oliver Wahlstrom at No. 9.

Evan Bouchard, a right-shot defenceman with the OHL’s London Knights, makes a significant jump up the rankings from No. 20 in November to No. 10. Bouchard has excellent sense and feel for the game, complimented by a poise that makes you think his heart rate is 40 beats per minute.

A great passer, Bouchard has the ability to push the level of his game higher when required and makes the tough plays look easy. Hall of Fame defenceman Larry Murphy played a similar style, and while not always appreciated, he was a key contributor to four Stanley Cups.

Editor's Note: On Tuesday, we corrected an errant omission - we should have included Guelph Storm centre Cam Hillis at No. 47 and he's now there, making it a 76-player list.