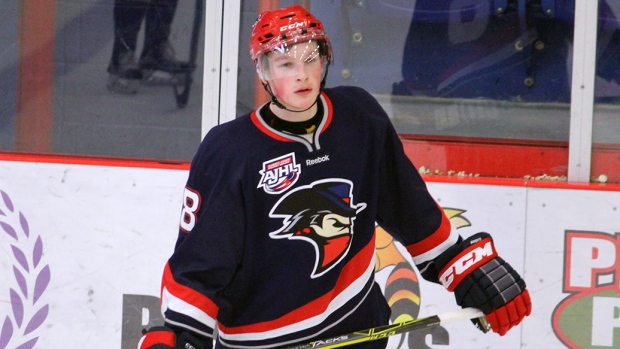 Nolan Patrick of the Brandon Wheat Kings and Nico Hischier of the Halifax Mooseheads continue to occupy the top two spots in the March edition of Craig’s List.

Patrick has done nothing but solidify his spot at the top of our rankings for the 2017 NHL Entry Draft. After missing much of the first half of the season due to injury, Patrick’s game is rounding into form (20 goals and 26 assists in 33 games). He’s showed he has all the attributes and potential to become a top centre at the next level.

Patrick combines high-end sense and feel for the game with considerable skill and size, leaving no doubt that he belongs on the top of the list.

Hischier (38 goals and 48 assists in 57 games) remains firmly in second. While the Swiss centre has been pushing Patrick for first overall, he hasn’t done enough to surpass him.

Martin Necas, who has played the entire season with Brno in the Czech Extraliga, the highest league in the Czech Republic, moves one spot up from our January rankings to land in third.

Necas (seven goals and eight assists in 41 games) has a style of game that reminds me of Philadelphia Flyers captain Claude Giroux. He has a high skill level, can finish or create, and has a desire to find some way to make an impact in every game he plays.

Gabe Vilardi of the Windsor Spitfires (29 goals and 32 assists in 49 games) is at No. 4. The skilled centre is strong on the puck and uses his size and talent to be a very productive offensive player.

Cale Makar of the Alberta Junior Hockey League’s Brooks Bandits lands at No. 5 on the list. The dynamic defenceman (24 goals and 51 assists in 54 games) looks like the best blueliner available in the draft. I can’t help but think of Erik Karlsson when I watch Makar on the ice, right down to his size and style of play.

No. 6 Casey Mittelstadt has returned to play for Green Bay in the United States Hockey League after completing his season at Eden Prairie High School in Minnesota. The winner of the prestigious Mr. Hockey Award in the state, Mittelstadt has very good skill and versatility in his game and can play centre or left wing. He has the potential to be a very solid offensive player in the NHL.

Portland Winterhawks forward Cody Glass (32 goals, 62 assists in 69 games) jumps three spots from our January rankings to now sit at No. 7. Swedish defenceman Timothy Liljegren, who was at No. 3 in our January rankings, now sits eighth. He has struggled to find his game after missing much of the first half of the season with mononucleosis. St. Cloud State freshman centre Ryan Poehling (seven goals, six assists in 35 games) is at No. 9.

Rounding out the top 10 is centre Nick Suzuki of the Owen Sound Attack. It’s important for young players to continuously improve and take their game to higher levels. That’s exactly what Suzuki (45 goals, 51 assists in 65 games) has done. When I watch him play, I see a lot of similarities to Anaheim’s Rickard Rakell.