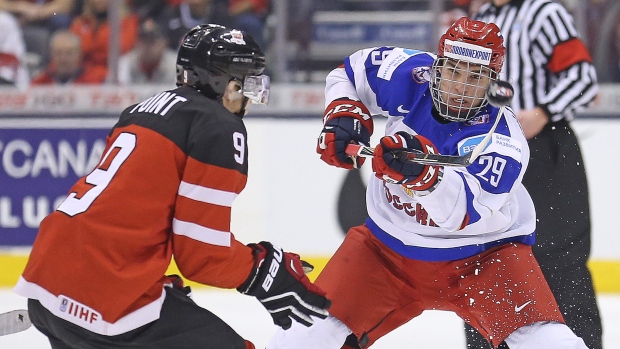 This month, blueliner Ivan Provorov moves ahead of Noah Hanifin, Zach Werenski and Oliver Kylington, all the way up to No. 5 on Craig's List.

While the debate will rage, I see Ivan as the best and most complete defenceman in the draft. His command of all the situations in the game allows him to contribute and make an impact regardless of what's confronting him. Ivan can make the game look effortless with a brilliant understanding of what's unfolding in front of him either from a defensive or offensive standpoint. His skating, quickness and balance, pinpoint passing, poise under pressure and a great competitive determination align to make him a defenceman who can influence the play and the outcomes in a consistent and positive manner.

The other three defenseman are all very good in their own right, but none of them are as complete as Ivan.

The Edmonton Oilers - if they should fall out of the top two picks in the draft - are faced with an interesting decision. With top two defencemen available, is it a foregone conclusion that one of them will become an Oiler?

A case could certainly be made to go that route. But if you were prepared to select one of Connor McDavid or Jack Eichel, then Dylan Strome would be an excellent selection. He is a big, No. 1 centre who plays the game in a similar manner to Jonathan Toews and Anze Kopitar. Now I'm not saying he's either one of those players, but the opportunity to add a centre who can control the middle of the ice and contribute in any situation is something that would strengthen any team.

Timo Meier has taken a leap up the list. It's not a case of watching him play well and showing strong potential, because I've been watching him for three years and have seen lots of positives from him. When I evaluate Meier's attributes and potential and then compare them to others in the draft, I see a very strong player. He can play the game in three essential areas; skill, physicality and in-game thinking. He knows how to utilize all of those elements to have a real significant role in the game.

Pavel Zacha was mentioned as a potential top pick in the 2015 draft a few years ago, but is far off of that at this time. Injuries have hampered him and while I think he's an NHL player, I don't see a player who can be viewed as elite. Adjusting to being a different type of player is important as time passes and as Pavel returns from injury, I'll be watching very closely to see if it is 'growing pains' or if he projects as a different type.