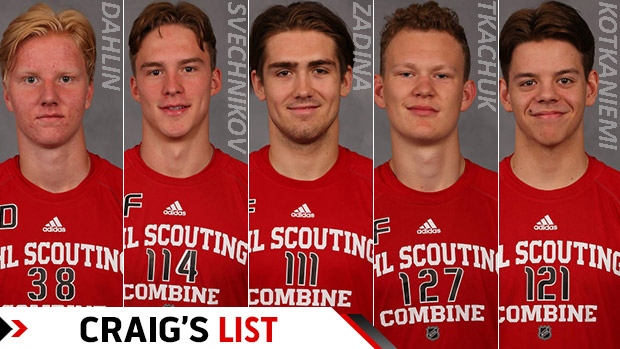 By now you know all about Swedish defenceman Rasmus Dahlin and why he’s the clear top prospect ahead of the 2018 National Hockey League Draft.

With the first pick on June 22 the Buffalo Sabres have an opportunity to select a player who very well may be the best blueliner entering the draft since Denis Potvin went first overall to the New York Islanders in 1973. Dahlin is a franchise-defining, elite defenceman who should eventually become a mainstay on a top pairing.

While Dahlin is in a class all on his own, there has been a season-long race to fill out the rest of the top four between Boston University left winger Brady Tkachuk, Barrie Colts right wing Andrei Svechnikov and Halifax Mooseheads right wing Filip Zadina.

Svechnikov is the clear winner in the June edition of Craig’s List, riding the strength of a 40-goal season (in just 44 games played) to second spot in our rankings. The 6-foot-2, 192-pound Russian has a game modelled after likely Hall of Famer Marian Hossa and has shown the kind of offensive skill that translates well at the pro level.

Zadina edges Tkachuk for third spot in our final rankings after leading all QMJHL rookies in goals (44) and points (82) this season. While Zadina is a natural scorer, Tkachuk has more of a physical presence and all the tools to be an effective power forward. Both guys project as top-line players at the NHL level.

The first centre on the board is Finland’s Jesperi Kotkaniemi, who had 10 goals and 19 assists in 57 games playing against men with Assat Pori in the SM-Liiga. Kotkaniemi’s stock has been rising since mid-season and his game is reminiscent of Los Angeles Kings star Anze Kopitar.

Acadie-Bathurst Titan right-shot defenceman Noah Dobson sits at No. 8, followed by London Knights captain Evan Bouchard, who had 87 points (25 goals, 62 assists) in 67 games to lead all OHL defenceman in scoring this season.

The top 10 is rounded out by USA Hockey National Team Development Program right wing Oliver Wahlstrom, who might be the best pure goal scorer available in this draft.

Ryan Merkley is a name to watch in the first round. The Guelph Storm defenceman sits at No. 23 in our final rankings, but his elite offensive skill is undeniable. He had 55 points in 62 games during his rookie season, and then followed that up with 67 points in 63 games this year. But there are questions about his defensive play and maturity. Merkley dropped from No. 21 in the Central Scouting mid-season ranking to No. 45 on the final list.

Merkley could be this draft’s ultimate wild card. He has his supporters and his detractors and will certainly be a person of interest on draft night.