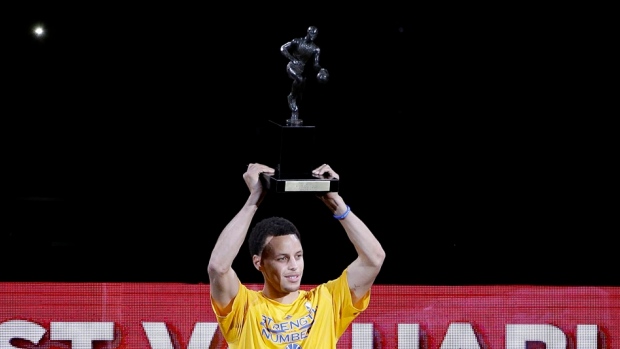 OAKLAND, Calif. - Golden State Warriors guard Stephen Curry was presented with his NBA Most Valuable Player trophy before Game 2 of the Western Conference semifinals against Memphis.

Commissioner Adam Silver handed Curry the trophy to the cheers from a raucous crowd Tuesday night.

Curry won the award Monday. He received 100 of 130 first-place votes for a total of 1,198 points from a panel of 129 writers and broadcasters, along with the fan vote on the NBA's website. Houston's James Harden was second with 25 first-place votes and 936 points.

Curry joins Wilt Chamberlain as the only players in Warriors history to win the award. Chamberlain won in 1960 when the franchise played in Philadelphia.