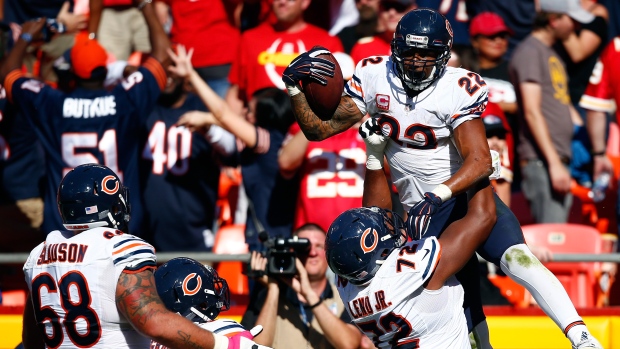 It just made his fourth-quarter comeback even more impressive.

Cutler led the Bears to two touchdowns in the closing minutes Sunday, the second an alert toss to Matt Forte with 18 seconds remaining, giving Chicago an 18-17 comeback win after Kansas City lost star running back Jamaal Charles to a potentially season-ending knee injury.

"I knew we needed to make some plays in the fourth quarter. I trust the guys around me," said Cutler, who was making his second start after a hamstring injury. "I know all I've got to do is get the ball out to them and they'll do most of the hard work."

Playing without wide receivers Alshon Jeffery and Eddie Royal because of injuries, along with three starting offensive linemen, the Bears (2-3) trailed 17-3 early in the third quarter.

That's when Charles went down while trying to make a cut, his right knee twisting at an ugly angle. The preliminary diagnosis was a torn ACL and Charles will have an MRI on Monday.

With him out, the Bears quickly seized the momentum.

After Robbie Gould's second field goal got them going, Cutler led an 88-yard drive that he capped with a 22-yard pass to Marquess Wilson with 3:05 left. The 2-point conversion came up short, but the Bears defence responded by forcing a quick three-and-out.

With help from a pass interference call on Chiefs rookie Marcus Peters, the Bears quickly moved down the field. That's when Cutler took a snap from the shotgun, dropped the ball, picked it up and spotted Forte running past safety Husain Abdullah in the end zone for the go-ahead score.

The Chiefs (1-4) tried a 66-yard field goal that came up short as time expired.

It was the second heartbreaking defeat at home for Kansas City this season. AFC West rival Denver scored two touchdowns in the final 2:27 for a 31-24 victory last month.

Making this one even worse was the injury to Charles, who was starting to get into a rhythm went he went down deep in Chicago territory. He immediately grabbed his right knee — Charles tore the ACL in his left knee four years ago — and was helped straight to the locker room.

"It looks more like a torn ACL than anything else," Chiefs coach Andy Reid said. "We'll have an MRI on it tomorrow and we'll just see how that goes."

That drive stalled, and Cairo Santos had his field-goal attempt blocked. The missed points wound up looming large in a game that Kansas City will remember for its missed opportunities.

"We had so many opportunities to win this game," wide receiver Jeremy Maclin said, "and we blew it. We don't have anybody to blame but ourselves."

Until Charles went down, everything was going splendidly for the Chiefs, who had jumped out to a comfortable lead thanks to a pair of surprising touchdowns.

The first occurred on the third series of the game, when Cutler was sacked in the end zone by Jaye Howard and Allen Bailey. Cutler lost the ball before hitting the turf, and rookie linebacker Ramik Wilson jumped on it for a touchdown in his first NFL start.

The Chiefs' second TD came when Alex Smith connected with DeAnthony Thomas with a 14-yard pitch-and-catch midway through the second quarter. Why so surprising? It was the second scoring reception by a Kansas City wide receiver since December 2013.

But things went haywire for the Chiefs once Charles left, and the Bears began to chip into the lead. Cutler ultimately led them all the way back with poise down the stretch.

"The passing game opened up for us a little bit," Forte said, "and our two-minute offence took over at the end for the second week in a row. It's just a testament to the coaches and practice. We practice that all during the week."

Notes: Smith was 16 of 30 for 181 yards without an interception, but was sacked three times. He's been sacked 22 times already this season. ... Bears coach John Fox improved to 8-1 against Kansas City. Most of those wins came with Denver. ... Cutler needs three TD passes to surpass Sid Luckman (137) for most in franchise history.