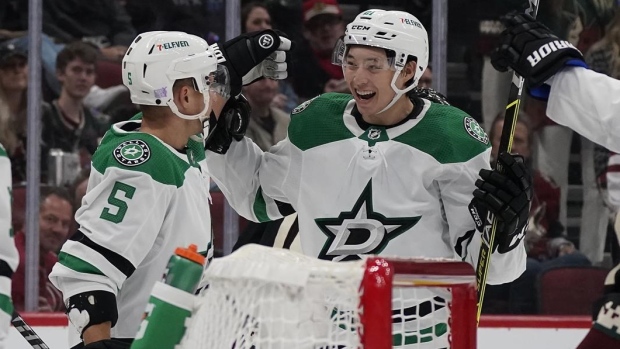 GLENDALE, Ariz. (AP) — Hot-shooting Roope Hintz scored his seventh goal in eight games and the Dallas Stars extended their winning streak to four with a 3-2 victory over the Arizona Coyotes on Saturday night.

Jacob Peterson and Jason Robertson also scored for the Stars, who have won six of their last seven. Joe Pavelski had two assists. Braden Holtby had 25 saves for the Stars, including two on point-blank shots midway through the third period.

“I have good confidence right now," Hintz said. “I had it before, too, but before it didn't go in. We just have to keep playing like this as a team.”

Antoine Roussel and Travis Boyd scored for the Coyotes. Boyd has scored in a career-best three straight games. Scott Wedgewood, who was pulled with two minutes remaining, had 26 saves.

All of Hintz's goals have come in the last eight games, and he has 11 points in his last nine games. He kicked off the scoring 54 seconds into the game, starting with a shot from the left circle that Wedgewood stopped but could not control. Pavelski could not stuff in the rebound, but the puck bounced to Hintz, who pushed it in.

“It sets the tone for the game,” Hintz said. “We saw that we were ready to play."

The Stars never trailed, although Arizona tied it twice, the first time by Antoine Roussel, who tied it about four minutes into the game by getting behind Holtby and swatting in a high puck into the net after a shot from the right circle bounced off Stars’ defenseman John Klingsman in the crease. The goal stood after being reviewed for possible high stick.

“We stuck to our game plan from the start,” said Holtby, who made his first start since Nov. 10 after missing time with an injury. "They (Coyotes) are playing better than their record says lately. It was good to get back and good to get a win. It was a very impressive mental win.”

Peterson gave the Stars a 2-1 lead late in the first period when the Coyotes could not clear a puck from in front and he punched it into the left side.

Boyd tied it at 2 4:24 into the second period when he picked up a puck in front after it bounced off teammate Kyle Capobianco and pushed it in, but Dallas went back in front about 4 minutes later when Robertson took a pass from Andrej Sekera and found a wide open right side.

“That's a good team that battles hard,” Coyotes coach Andre Tourigny said. “We hit them when they were hot.”

The Hintz-Pavelski-Robertson line had two goals and five points.

“That line has been dynamic,” Dallas coach Rock Bowness said. “You need a line to carry your team. Right now they are doing the job.”

Neither team scored in the third period.

“We have to start winning on the road,” said Bowness, whose team is 4-5-1 away from home. “We're getting to where we need to be. We want to be in the top three spots in the division, and we are getting closer to doing that. We put ourselves a hole the first 10-12 games, and now we have dug our way out of it. We have to keep going.”

Coyotes center Jay Beagle (lower body) was placed on injured reserve. … Coyotes forwards Andrew Ladd and Johan Larsson were removed from COVID-19 protocols. … Coyotes’ Jakob Chychrun leads the league defensemen with 70 shots on goal. … Coyotes forward Clayton Keller limped into the locker room after blocking a slap shot with his leg midway through the second period but returned later in the period.

Coyotes: Play at Winnipeg on Monday.