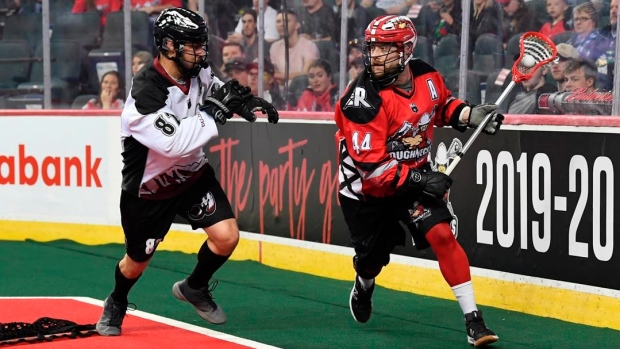 Dane Dobbie has prepared to defend the Calgary Roughnecks' championship by playing even more lacrosse.

Dobbie's seven goals and six assists led the Roughnecks in scoring through last season's National Lacrosse League playoffs, helping Calgary to its first title since 2009. To build on his NLL Cup MVP performance, Dobbie has kept his stick in his hands.

"I think I've had about five weeks off from lacrosse these past 12 months," said Dobbie. "Not necessarily improving my game, but sticking with the game and being able to play year-round is definitely a benefit.

"When it comes down to it, I think everything fell into place last year and we have to go out there and work. It's all based off of winning games, it's not an individual sport."

Dobbie split time between the Langley Thunder and Maple Ridge Burrards of the Western Lacrosse Association this summer, scoring 27 goals and adding 34 assists over 12 games for the two teams. After a deep playoff run with the Burrards, the Elora, Ont., native helped Canada win gold at the world indoor lacrosse championship in Langley, B.C., in late September.

When he was growing up in Southern Ontario, the 32-year-old never imagined that he'd be able to play so much elite lacrosse as an adult.

"I grew up in the Toronto area, used to go to Toronto Rock games all the way up as a kid," said Dobbie. "It was something I dreamt of, being able to play on that stage. Thankfully I stayed healthy enough and got the opportunity at the right time and I've been able to make the most of it.

"This game has come a long way since when I started in the league to where it is now. The guys (who) have played in this league have built it. It's something special and we want to keep it going."

Expansion has seen the NLL grow to 13 teams this season, with a league-tying-high five based in Canada for the first time since 2002. Calgary, Toronto, the Saskatchewan Rush and Vancouver Warriors are joined this year by the relocated Halifax Thunderbirds, who moved from Rochester, N.Y., in the off-season. A new franchise is taking over in Rochester to replace the departed team.

That expansion has also caused the NLL to split into three divisions, with New York, New England, Philadelphia and Georgia in the East; Toronto, Halifax, Rochester and Buffalo in the North; and Calgary, Vancouver, Colorado, Saskatchewan, and San Diego in the West.

The Roughnecks kick off the season on Friday in Vancouver, which finished last season at the bottom of the West Division with a 5-13 record.

The disappointing finish came after a major rebuilding year that saw the team change its name from the Stealth to the Warriors and move from Langley to Rogers Arena in downtown Vancouver. General manager Dan Richardson also overhauled the roster, putting an emphasis on local talent from British Columbia's lower mainland, and installed a new coaching staff led by Chris Gill.

Gill, a former Rock star as a player, had little time to prepare last season because a labour dispute between the NLL and the players' union shortened training camp and forced him to hit the ground running.

"This year we all have our foot in the door, there's familiarity," said Gill. "We feel that we've given ourselves a lot more depth than we had last year. We've prepared and we were able to work hard and pick the best team possible and that's what we've done.

"That's the big difference at this point in the season compared to last year."

Sparked by a tweet where Bissonnette claimed that he could walk on to any NLL roster and become a starter, the Warriors signed him to a professional tryout contract and invited him to the last two days of their training camp. Afterward, the club sent out a humorous video of Bissonnette's tryout, showing an arrogant "BizNasty" getting his comeuppance at the hands of the Warriors players.