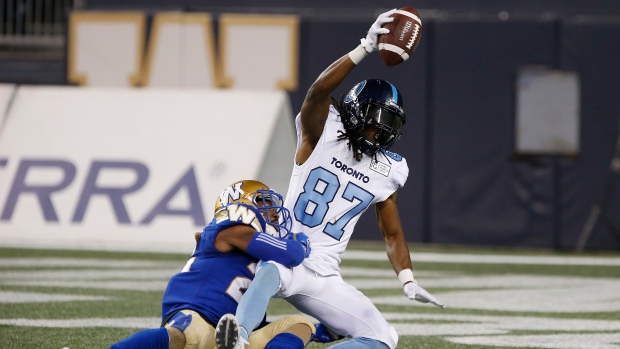 The Canadian Football League is rife with issues that divide fans and stakeholders alike.

But there is one issue that everyone – players, owners, fans, coaches, GMs, media, agents, the CFL Players’ Association and the commissioner – agrees is a problem that needs to be fixed.

And that is the high degree of player movement that happens annually, with roughly 60 per cent of the league’s player pool eligible for free agency at the end of each season.

While many of those players re-sign with their teams and some retire, about 70 players throughout the league – more than one in six – go from one team to another every off-season.

That much player movement via free agency makes it tough for GMs to build teams, makes players feel like mercenaries and leaves fans with their heads spinning as players often move from one team to another before they’ve had a chance to build a following.

For all the hand-wringing over the subject of losing a few players to the NFL each off-season, the real issue eroding the CFL’s appeal to its fans is the degree of movement within the league itself.

“I hate seeing the [end-of-year] free agent lists,” said Winnipeg linebacker Adam Bighill, one of the league’s star defensive players. “It’s tough on the overall market and it’s tough on GMs too; they’re not going to tell you they enjoy that … And it creates no sense of stability or trust for players.”

While high player turnover has always been a concern in the CFL, the problem got worse after the collective bargaining agreement signed in 2014 changed the minimum length of veteran contract from two years to just one. (Rookie Canadians must sign for a minimum of three years, and rookie Americans a minimum of two.)

In December, shortly after the CFL released a list of 321 pending free agents for this off-season, Bighill asked fans on Twitter what they thought of players signing one-year deals. The response was overwhelming.

“Every single person said, ‘I hate one-year deals,’” Bighill said. “You always say, ‘The customer is always right.’ And everyone who is paying dollars to be a part of [the CFL]… well, they are saying they hate it.”

Bighill, who signed a three-year contract with Winnipeg before the 2019 season, is a rarity these days. He did so to show his commitment to the city and the team, and so that fans could buy his jersey without concern of it being a waste of money.

The crux of what drives the CFL’s mass free agency is the fact that the league’s CBA dictates that contracts must be honoured by players for their full length, but not by teams.

“I think we all know that in the CFL a three-year deal is really just a one-year deal that could continue if they let it continue," said Bighill. "As a player you can stipulate and agree upon years two and three. But there’s no guarantee you’ll get there.”

With the introduction of one-year contracts seven years ago, players and agents quickly figured that, from an economic strategy standpoint, there was very little reason to sign deals for more than one season.

The flaws of this dynamic are captured in the example of Derel Walker and the Toronto Argonauts.

Walker was arguably the CFL’s best receiver coming off the 2018 season, having racked up more than 4,200 yards and 26 touchdowns in four seasons with Edmonton. The Argonauts wined and dined the then-27-year-old when he hit free agency in February of 2019, making him the league’s highest-paid receiver at $275,000 per season on a one-year deal.

In the heart of his prime, Walker was the kind of player the Argos should have been able to rebuild their fan base around. To that end, the club invested in a Walker bobblehead giveaway for thousands of young fans to take home early in the 2019 season.

But Walker’s contract was up at the end of the season and he was bound for the free-agent market again 12 months later.

That kind of situation doesn’t benefit the league, the Argos or Walker.

Walker was unsigned when the pandemic ground CFL business to a halt last March, but this week he rejoined Edmonton on another one-year deal, meaning he can be eligible for free agency again ​next season.

The CFL needs to admit there is a corrosive element to the way the league and players do business, one that is undermining the ability of its players to connect with fans.

So here’s what needs to happen.

The CFLPA needs to give up the one-year contract and return the minimum to two seasons. The league needs to require that teams pay signing bonuses upfront, but amortize that amount as it applies to the salary cap over the life of the contract.

For example, a player signing a three-year contract for a total of $300,000 with a $75,000 signing bonus would have $25,000 of that bonus amount applied against the salary cap for each years of the deal.  If the player gets released, those $25,000 amounts would still get applied to the team’s cap for each year of the deal.

The result of this would give players more comfort signing longer deals, knowing it's financially punitive for teams that don't to live up to their end of a contract.

Teams would still be able to walk away from a player who fails to live up to expectations within the timeframe of the contract, but not without taking on "dead money" to their future salary cap.

Such a system wouldn't cost the teams any money and wouldn't make the players any richer. But it would go a long way toward stemming a problem and creating a better league for players, teams and fans.

And that’s really all that matters.  ​