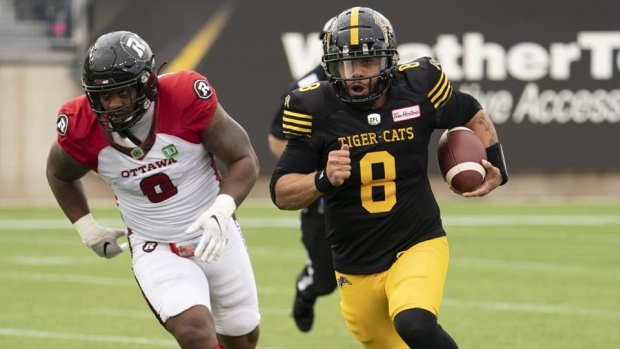 With CFL free agency (mostly) put to bed for another year, it’s time to look at what stood out over the past week.

Another huge free-agent class resulted in dozens of players switching teams – some for more money, a few for less. Other players looked over the edge and decided it was best to stay put.

Here are my impressions from a busy opening week of CFL free agency.

The Redblacks get remade

With few financial commitments to carry into 2022, Ottawa was able to strike the market hard, essentially rebuilding its entire offence on the fly. The tally so far includes three new offensive linemen, three import receivers, two Canadian receivers, a defensive end, and a string of players in the secondary.

Ottawa also landed a starting quarterback in Jeremiah Masoli, who on his own makes the Redblacks a vastly improved team from a year ago.

Overall, Ottawa announced the signings of 16 players during the first two days of official free agency, roughly one-third of a team, and they keep coming

Getting so many moving parts to fit together will be the coaching staff’s challenge, especially during the first half of the season.

But being able to head into free agency with an empty shopping cart and a fist full of money paid big dividends for Ottawa.

The BC Lions’ decision to go with the duo of Nathan Rourke and Michael O’Connor at quarterback is a delicious storyline for CFL fans, especially those who harbour the dream of seeing a Canadian star at the position – something that hasn’t happened in more than half a century.

But the move comes with a lot of risk, given the duo’s lack of experience.

It’s unheard of for a CFL team to declare a starting quarterback of any nationality based on a rookie season that included just two starts, one of which took place in a meaningless game at the end of the year.

While the Lions may have every reason to believe that Rourke is ready for this opportunity, backing him up with a player who hasn’t thrown a live pass since 2019 is risky at best.

Combined, Rourke and O’Connor have completed 67 career passes in the CFL. By comparison, Ottawa’s Caleb Evans, a rookie in 2021, has completed 108.

With few options to add experience at the position before the season starts, the Lions are boldly going where no team has gone before.

Their insurance behind the Canadians is former Saskatchewan backup Isaac Harker, whose only start last season came in a meaningless finale to the regular season.

Speaking of the quarterback market

The quarterback market has now fully retrenched to pretty much exactly where it was before the 2019 off-season, when both Michael Reilly and Bo Levi Mitchell hit the $700,000 per season mark and carried the rest of the market up with them.

Besides Ottawa’s Masoli and B.C.’s Harker, the only quarterbacks who changed teams via free agency were Matthew Shiltz and Trevor Harris, who went as backups to Hamilton and Montreal, respectively.

With Montreal inking Harris at a bargain-basement price, and the retirement of former Winnipeg backup Sean McGuire, there are just two quarterbacks who started games in 2021 still on the market – Matt Nichols and David Watford.

Winnipeg is facing a real challenge to fill its vacancy at backup quarterback, with minimal dollars to spend and few options available.

The top got blown off the receiver market

Leading up to the free-agent period, it appeared the receiver market might top out in the $170,000 per season range, which is where players such as Reggie Begelton and Eugene Lewis came in when they re-upped with their respective teams.

That changed when BC re-signed Lucky Whitehead to a deal worth $205,000 before the start of free agency, a deal structured to include some injury protection for the Lions.

That opened the door for Duke Williams to fetch $260,000 from Saskatchewan and Kenny Lawler to land $300,000 from the Edmonton Elks.

Historically, it’s been hard for pass catchers to live up to those kinds of salaries, as it takes a lot of production to do so.

Lawler led the league in receiving last season and is a legit top-level deep threat who can stretch the field. Williams is a big-bodied matchup nightmare who dominates 50/50 balls.

They’ll both need big seasons to maintain those salaries into 2023.

Calgary and Winnipeg mostly watched from the sidelines

The Calgary Stampeders and Winnipeg Blue Bombers – combined – announced the signings of just three free agents during the first two days of the market.

Calgary traded for the rights to linebacker Cameron Judge, then added Canadian linebacker D.J. Lalama, who sat out last season.

The Blue Bombers limited themselves to signing receiver Greg Ellingson, with all their money tied up in targeting retaining their own players.

In an ideal world, Andrew Harris would finish his career as a Winnipeg Blue Bomber, the city where he was raised, became a legitimate CFL star and led his team to back-to-back Grey Cups.

Instead, he will spend the 2022 season in Toronto where, no matter what he does, his star won’t burn nearly as brightly as it does in Winnipeg.

There’s no doubt the Blue Bombers were disappointed with Harris’ level of conditioning last season, when he missed seven of 14 games during the regular season. That seemed to set the tone for discussions around a new contract, which hit a stalemate last weekend – even before the Blue Bombers brought back Canadian running back Brady Oliveira.

Harris will be 35 this season, which is rare for a high-volume running back. But he demonstrated last season that he is still a force when healthy, and his pass protection is something the Argos value as well.

Harris will earn $165,000 this season, which is less than he’s used to earning but substantially more than what was offered to him in Winnipeg.

Offensive linemen got paid because they always do

A simple lesson in supply and demand economics explains why offensive lineman get paid the way they do every off-season.

Every CFL team likes to start three to five Canadian offensive linemen. There aren’t enough to go around in the league, so teams pay mightily to keep the ones they have. The very few who go to market are quickly scooped up, leaving some teams empty-handed and having to patch their line when the season begins.

That was brilliantly illustrated by some of the contracts handed out to such players as Mark Korte, who moved from Ottawa to Edmonton for $210,000, and Michael Couture who re-signed in Winnipeg for $180,000 after turning down more from BC.

Free agency is a tough place to build an offensive line because you’re going to pay for it, but Ottawa managed to land Hunter Steward, Darius Ciraco and Ucambre Williams, each for $150,000 or less.

The preponderance of one-year deals continues

CFL players and teams continue to settle on mostly one-year deals, which means teams will be going through the exact same process a year from now.

I wrote about this phenomenon earlier this week, so I won’t repeat myself. But it’s a problem the league appears to be stuck with.