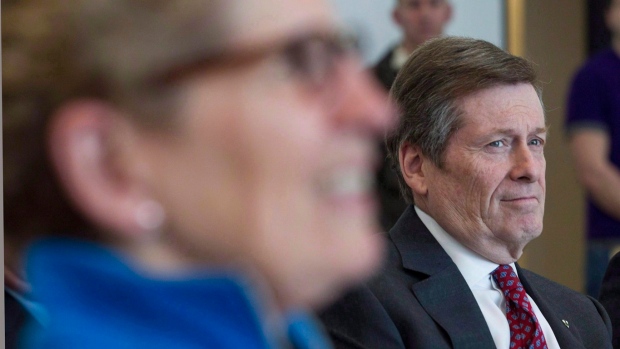 TORONTO - Toronto will not enter the bidding process to host the 2024 Summer Olympics.

A source with knowledge of the discussions told The Canadian Press late Monday that Mayor John Tory made the decision after he received a lack of firm support from the province and lukewarm enthusiasm from potential sponsors.

The mayor is expected to announce his decision at a news conference on Tuesday, which is the deadline for cities to submit a letter to the International Olympic Committee to register as possible candidates to host the Games.

Talk of another bid emerged after this summer's Pan Am Games, and Tory has since been consulting with politicians, sports officials and other stakeholders on what's involved in vying for the Olympics.

After an initial wave of enthusiasm, many began to express concerns in recent weeks about the implications of an Olympic bid, particularly on the financial front.

Members of city council voiced misgivings about the costs of bidding for and hosting the Games, while neighbouring Mississauga said it would not support a Toronto pitch. And critics sounded the alarm about what they called unprecedented secrecy surrounding the discussions.

Opponents of a bid applauded the news Monday, but said they worried the same issues would surface should the city make an attempt in the future.

"It looks like Mayor Tory will make the right call by saying no," Ann Harwood of the group NoTO2024 said. "But in the future, we encourage the mayor to honour his campaign pledge of transparency in all civic matters."

Janice Forsyth, director of the International Centre for Olympic Studies at Western University, said keeping details of the consultations under wraps undermined support for a possible bid.

"One of the mayor's critical mistakes was in not talking about it to people sooner," she said. "To keep it secret for so long, you're only doing damage to yourself."

Ultimately, she said, holding off was the right decision.

"Economically, it's not worth it, unless you can change the host city contract so the public isn't backstopping the costs."

And new rules recently enacted by the IOC make it unclear what's expected of host cities and how the bidding process will unfold, she said.

The Canadian Olympic Committee — which had pushed for Toronto to throw its hat in the ring and even, according to a city councillor, offered to pay the $150,000 application fee — would not comment Monday.

Toronto made two unsuccessful bids for the Games — in 1996 and in 2008 — and Tory has said he doesn't want to lead a third failed attempt.

His decision could nonetheless affect the city's chances to host the Olympics down the line — at least one councillor has suggested trying for the 2028 Summer Games.

However, the IOC typically rotates between continents in awarding the Summer Games, and a municipal report published last year warned that "if Toronto does not bid for 2024 and the Summer Games are awarded to a U.S. city, it is likely that Toronto will not have a reasonable chance of winning until at least the 2036 Summer Games."

Boston also withdrew from the race recently amid concerns over who would foot the bill for cost overruns, but Los Angeles has announced it will apply instead.

Paris, Rome, Budapest, Hungary and Hamburg, Germany have also said they would be in the running. The winning city will be chosen in 2017.