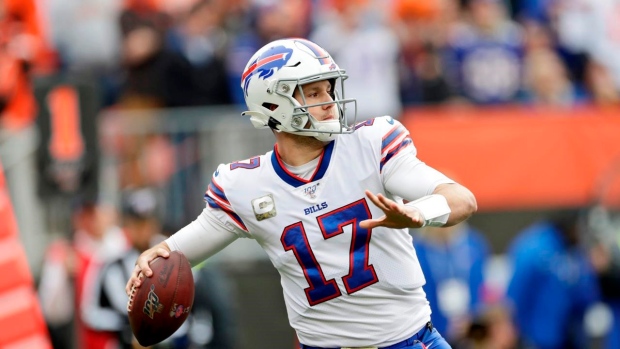 ORCHARD PARK, N.Y. — For a strong-armed quarterback, Josh Allen isn't surprised by concerns being raised about his inability to hit a deep pass this season.

Turns out, the Buffalo Bills’ second-year starter happens to be wondering the same thing.

"I definitely get the question. And trust me, I want to complete every pass I throw," he added. "It's something we're working on, something that will happen over time. But it's not like we're throwing a bunch of deep balls during the game. We have a couple of opportunities. Obviously, it would be nice to hit those."

Allen's deep-ball accuracy has been a season-long issue and became a hot topic of discussion after he overthrew several receivers in a 19-16 loss to Cleveland on Sunday.

It was a game in which Allen finished 22 of 41 for a career-high 266 yards but failed to complete a pass of 30 yards or longer for the fourth time this season. It also marked the fourth time in six games — and fifth overall — Buffalo (6-3) has scored 17 points or fewer.

The lack of a quick-strike dimension is placing a premium on the Bills being efficient over lengthy drives, which could be easily derailed by mistakes such as penalties and sacks. Against Cleveland, Buffalo was limited to scoring just two touchdowns on six drives that crossed midfield, and two ending with Stephen Hauschka missing field-goal attempts, including a 53-yarder in the final seconds.

Coach Sean McDermott's patience is growing thin over questions about his sputtering offence as Buffalo prepares to play at Miami on Sunday.

McDermott cut short his weekly Wednesday news conference by about four minutes when he abruptly left the podium after being reminded the Bills rank 25th in the NFL in having scored 174 points.

"Move the ball. Score points. If we don't do that, I'm frustrated simply put. OK? Thanks," McDermott said, before walking off.

This came after he spent a majority of the session fielding questions about Allen's development.

Though he maintains confidence in the quarterback, McDermott noted Allen remains a work in progress.

"We've got to continue to bring Josh along, but also understand that he's in his second year quite honestly," he said. "So it's a blend of how do we grow, how do we evolve, how do we develop at the right pace?"

The Bills have focused on turning Allen into more of a pocket passer and limiting his runs after his 631 yards rushing last year set a single-season team record among quarterbacks.

Allen has been better at completing short and intermediate passes, which is reflected in increasing his completion rate from 52.8% in 12 games last year to 59.9% through nine this year.

He's also cleaned up his early season turnover issues. Allen has thrown 130 consecutive attempts without an interception and has lost just one fumble over the past four games. By comparison, he had seven interceptions and lost two fumbles in his first five.

McDermott suggested Allen's focus on reducing turnovers has translated into him being too cautious when attempting deep passes.

Allen has completed just four passes of 40 yards or longer — two of them coming off completions behind or at the line of scrimmage.

The longest pass he's completed was a 51-yarder to Cole Beasley in Week 2. The pass was measured by NFL's Next Gen Stats as having travelled 42.5 yards in the air, which ranks 38th and last among NFL quarterbacks with a minimum 83 attempts this season.

Those numbers don’t come close to matching the expectations the Bills placed in trading up five spots to select the raw Wyoming product with the seventh pick in the draft.

He was particularly encouraged by a message McDermott delivered to him and the offence earlier in the day.

“Coach sat us down and said, ‘Play fearless,’” Allen said. “Not saying I’m going out there to be reckless. ... Just being very aware of what’s going on, but not trying to be gun-shy about anything.”