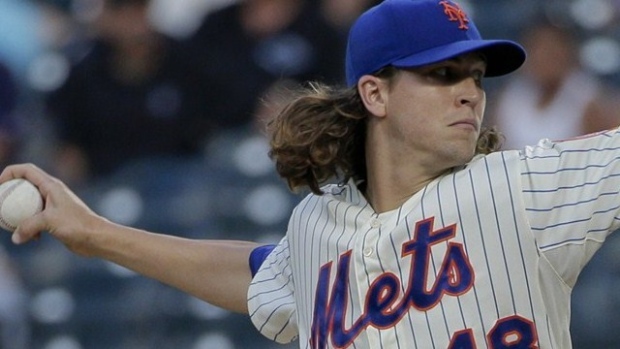 NEW YORK, N.Y. - Jacob deGrom took the mound with a disappointing record, but with the full backing of his manager.

The rookie right-hander rewarded Terry Collins' confidence with the strongest outing of his young career.

DeGrom struck out 11 in seven shutout innings and also delivered a table-setting hit from the No. 8 spot in the batting order as the New York Mets tagged All-Star Julio Teheran and the Atlanta Braves 8-3 Tuesday night.

"Showed you that he can certainly compete in this league," Collins praised.

The shaggy-haired deGrom (2-5) pitched the Mets to their third win in a row, and the franchise's 4,000th victory since starting out as an expansion team in 1962. Atlanta has lost three straight.

The lanky 26-year-old scattered seven hits, walked none and matched a career best for strikeouts.

"Feel I had my best start," deGrom said. "Controlling every pitch I needed to."

DeGrom said he got most of his strikeouts on "elevated fastballs and sinkers," though he felt his most effective pitch was his curveball.

"Knows what he's got to do to get a K when he needs it, and just goes out and does it," Collins said.

The Mets set a team record at Citi Field with 18 hits.

DeGrom's single led to a three-run burst in the second inning, and he exited as a 6-for-22 (.273) hitter in the majors, part of the reason Collins felt comfortable in tweaking his lineup.

"Don't really care where I bat. More focused on the pitching," deGrom said.

Said Collins: "Way too much made of the pitcher hitting eighth. I'll need to call La Russa and tell him he created a huge monster."

Hall of Fame manager Tony La Russa holds the record for most times batting his pitcher eighth in a season — few other skippers have followed his lead since.

Teheran (8-6) gave up a career-high 11 hits after shutting down the Mets in his previous outing, part of a Braves' sweep last week. He lasted just 3 1-3 innings, matching the shortest of his 53 starts in the majors.

"One of those nights that everybody has and today was mine," he said. "I feel like everything I threw, they got a good swing."

Teheran was picked Sunday for his first NL All-Star team, but the 23-year-old righty was very hittable from the get-go. Collins noted before the game that the ball was flying during batting practice — Granderson proved him correct, lining Teheran's second pitch off the facade of the second deck in right field.

"It's just one of those starts," Braves manager Fredi Gonzalez said. "The young man, he's bound to have a bad one every now and then. If you go out there 35 times, you're going to have a bad one, and today was one of his bad ones."

Granderson, rebounding nicely from a slow start, hit his fourth home run in seven games. On Monday night, his tying homer in the eighth inning sent the Mets to an 11-inning win over Atlanta.

The shot also gave the Mets a home run in eight straight games at Citi Field, matching a team record for the stadium that opened in 2009.

The Mets led 5-0 in the third. Atlanta put runners at the corners with two outs in the sixth, but Wright made a diving, backhanded catch on Jason Heyward's liner to end the inning.

Three Mets relievers closed out the win. They did it while winds whipped debris all over the field as a storm blew into the ballpark. Freddie Freeman hit a two-out, two-run single in the ninth.

NOTES: Granderson hit his third leadoff homer of the year and 27th of his career. Mets RHP Dillon Gee (strained right lat) comes off the disabled list to start Wednesday night against RHP Ervin Santana. ... Teheran is set to start Sunday against the Cubs at Wrigley Field, meaning he won't pitch in the All-Star game Tuesday at Minnesota. ... Andrelton Simmons went hitless for Atlanta. He had six straight multihit games coming in. ... This was the sixth time — all in the last month — that Collins has batted his pitcher eighth. DeGrom was the first pitcher to get a hit in that slot. Collins hit Eric Young Jr. in the ninth spot, saying it created a double leadoff position.