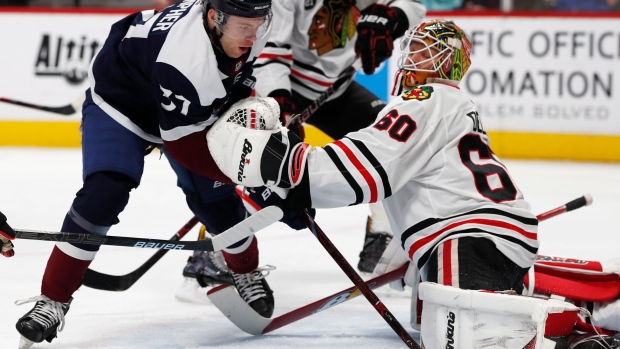 DENVER — Collin Delia's first start against Colorado was forgettable. He made his second one against the Avalanche memorable.

Delia made 35 saves in his first NHL start of the season and the Chicago Blackhawks beat the Avalanche 2-1 on Friday night for their third straight victory.

Recalled Monday from Rockford of the AHL after Corey Crawford sustained a concussion, the 24-year-old Delia made his third career start. In his previous start, he surrendered five goals late last season in a loss to the Avalanche.

"Probably a little bit of vengeance," Delia said. "I didn't have the best outing last time so I did everything in my power to prepare to be ready for this game."

"We didn't seem to have as much juice in the legs," Chicago coach Jeremy Colliton said. "It was a battle all night, it felt like we were playing uphill but credit to our guys they found a way to survive and we got some timely saves. We got great goaltending tonight."

Colorado's Colin Wilson left the game early when he fell over Andreas Martinsen and landed on his left shoulder. Wilson was helped off and didn't return because of an upper-body injury.

Later in the first period, Blackhawks defenceman Samuel Girard crashed into the end boards after getting tangled with Jonathan Toews. He skated off the ice and went to the locker room.

Avalanche coach Jared Bednar said Girard should be fine, but Wilson will miss some time.

"I would say he is week-to-week, not day-to-day," Bednar said.

Grubauer had 35 saves against Montreal on Wednesday night and made some key saves in the second period to keep it tied. He stopped Anisimov on a great chance early in the period, then stopped a point-blank shot by Dylan Sikura after the puck bounced off the boards right to the centre.

The goalie gave up a rebound early in the third period and Chicago capitalized. Grubauer made the initial stop on Patrick Kane's shot but it trickled through and Anisimov knocked it in at 1:19.

"It was one that I would have love to have back," Grubauer said. "One horrible goal cost us the game."

"Obviously, you want to get a little puck luck, but you make your own luck," Delia said. "You battle, you work hard and you think you deserve those bounces. On the road you're not going to ask why the puck stayed out of net, we're just happy with the two points."

Chicago struck first when Dominik Kahun came out of the box after serving a minor for too many men and got the puck from Connor Murphy in the neutral zone. He slid a pass across to DeBrincat, whose shot went off Grubauer's blocker and in at 8:07 of the first. It was his 16th of the season.

The Avalanche tied it when Alexander Kerfoot sent a backhand pass from the end boards to Compher crashing the net, and he flicked it past Delia at 2:58 of the second.

Colorado came into the game third in the league in power-play percentage but went 0 for 5.

"The penalty kill made the difference for us," Toews said.

NOTES: Colorado D Nikita Zadorov was out with a lower-body injury and will miss Saturday night's game at Arizona as well. The Avalanche recalled Anton Lindholm from the Colorado Eagles of the AHL.

Avalanche: At Arizona on Saturday night.