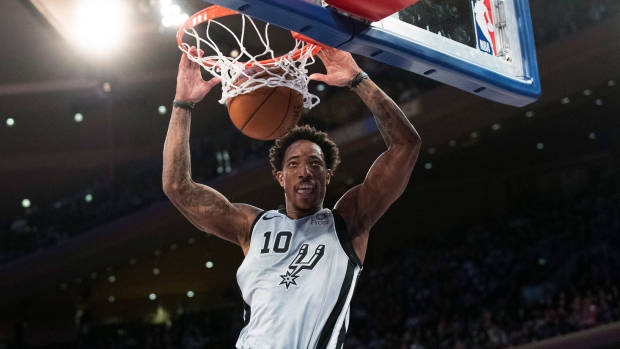 TORONTO – DeMar DeRozan’s ever-polarizing throwback style of play was only part of his identity when he was with the Raptors.

In Toronto, DeRozan was a franchise icon. He embraced the city, represented the organization with pride, and helped take the team further than it had been before.

While a segment of the fan base could never look past his defensive shortcomings or reluctance to extend his range beyond the three-point line, the vast majority appreciated him in spite of his flaws.

They knew him as a self-made all-star, as the guy who refused to take free agent meetings with other teams and declared, “I am Toronto”, as one of the first professional athletes to open up about his battle with mental health issues, and as Kyle Lowry’s best friend.

“He gave everything,” Lowry said. “He was the guy who said ‘I got us’ when [Chris Bosh] left, he re-signed here and helped take the organization to new heights – from not winning to winning and winning big. I think he poured his heart into the city… He gave the city and lot and the city [saw] him grow from a boy to being a man.”

There’s still a lot of love for him in Toronto, as we’ll be reminded of again when DeRozan returns to Scotiabank Arena for the second time as a visiting player on Sunday and receives another well-deserved ovation.

With his new team, the narrative is drastically different, though. The Spurs acquired him in the deal that sent the disgruntled Kawhi Leonard to Toronto 18 months ago. He’s not tied to their storied history in any meaningful way, and with rumours swirling ahead of next month’s trade deadline, DeRozan may just be a footnote at the end of one of the NBA’s greatest dynasties.

Now, there’s more of a spotlight on his game; what he can and, notably, what he can’t – or chooses not to – do.

The 30-year-old guard is playing some of the best – and certainly the most efficient – basketball of his career.

He’s on a remarkable run right now, having scored 20 points or more in 10 straight games. Over this stretch, he’s averaging 27.2 points and shooting an impressive 64 per cent.

On the season, he’s one of just two players averaging at least 20 points, five rebounds and five assists while shooting at least 50 per cent from the field. The other is the NBA’s reigning MVP, Giannis Antetokounmpo.

More than ever before, he’s doing it his way.

He’s never featured the three-ball or shot it especially well – he’s a career 28 per cent shooter. But, with the Spurs, he’s almost ditched it entirely. Through 37 contests this season, he’s attempted 25 threes – 0.7 per game – and made eight of them (32 per cent). Among players that have logged at least 1,000 minutes, only nine of them attempt fewer threes per minute than DeRozan: eight traditional big men and Ben Simmons.

With most teams and players – even many bigs – launching threes at historic rates, DeRozan is bucking the trend. He’s an old-school player in an evolving game.

The critics still question his methods. They’ve got a case, too. DeRozan remains a below-average defender and the Spurs are actually better with him off the court (plus-76) than they are when he’s on it (minus-76), which was also the case in two of his last three seasons with Toronto.

Despite the success he’s had and the resume he’s built, some wonder whether he’s a winning player in the NBA’s modern era. However, his former Raptors teammates and coaches are still believers in his game.

“He's a unique player and I like how he sticks to what he knows,” said Norman Powell, who grew up watching DeRozan, then played with him for three seasons, and still considers his former teammate a mentor and friend. “He plays his game despite what people are saying – this, that, and the other with him not shooing threes.”

“It’s still an effective way to play,” said Nick Nurse, who coached DeRozan as an assistant on Dwane Casey’s staff for five seasons. “We had some really, really top-rated offenses with him as the focal point of it. I think it’s a little bit over-stated, that his style doesn’t fit the modern game. I don’t think it’s that fair. It seems like you hear that constantly and I think you can say it a little bit, but to make it his one and only theme I think is a bit – I’m not saying it’s unfair, it’s over-played, let’s put it that way.”

“He gets to his comfort zone right and he’s really, really good at that. It’s like trying to ask a great classical pianist to play something else and they don’t really want to. I don’t know, he’s certainly at a super-high level for what he does.”

After a rough start to the season, DeRozan and LaMarcus Aldridge have the Spurs playing better of late. They’ve won four of their last seven games, including a couple of quality wins over Milwaukee and Boston, and are within striking distance of a playoff spot in the West.

While DeRozan’s name continues to come up in trade speculation, it’s hard to see the Spurs moving him, assuming their goal is to circumvent a rebuild and remain competitive in Gregg Popovich’s last few years at the helm (which is why they traded for DeRozan, rather than unloading Leonard for picks and prospects, in the first place). They’re unlikely to get fair value in return, despite DeRozan’s recent play, so they may as well stick it out, unless they decide he isn’t part of their long-term plan (he can opt out of his contract after this season).

DeRozan’s game isn’t the most aesthetically pleasing, which is part of the reason it draws so much ire, especially from fans. He hunts fouls, lives at the free throw line, and does most of his damage from mid-range. It’s not exactly a sexy brand of basketball, but it works, provided your expectations of him are realistic

He’s not the type of player that is going to take a team over-the-top and lead them to a championship in the way Leonard and few other select superstars can, which is why Toronto made the trade. He’s not a versatile, do-it-all type player like, say, Lowry.

However, he’s honed his craft and has blossomed into one of the best and most efficient scorers in the NBA, which is a significant accomplishment considering what he started from. Even outside of what he meant and will continue to mean to the Raptors franchise and the city of Toronto, he deserves credit for the player he’s become.​