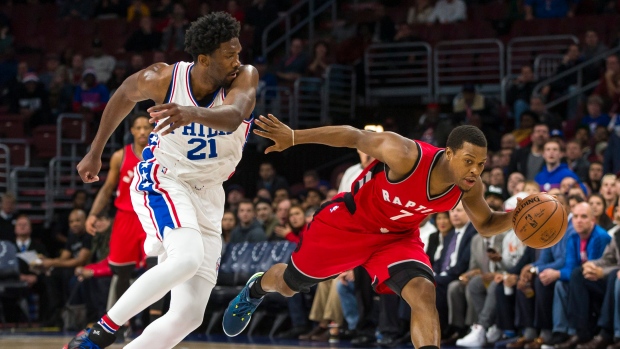 PHILADELPHIA — Kyle Lowry and DeMar DeRozan spent an off night in town at Villanova watching the best basketball team in the Philly area dominate in another victory. A night later, Lowry and DeRozan ditched the courtside seats to team up and keep Philadelphia the worst team in the NBA.

DeRozan scored 31 points and Lowry added 20 to help the Toronto Raptors win their fourth straight game, 123-114 over the 76ers on Wednesday night.

DeRozan continued to make the 30-point mark a routine part of his game and scored 31 points through the first three quarters. DeRozan posterized Jahlil Okafor with a dunk over the Sixers big man and easily rolled to his second straight 30-point game. He scored 30 points on Monday against Milwaukee and came in averaging a robust 27.9 points per game.

"It's just experience. My work ethic," DeRozan said. "I just try and be better every single year."

He's having his best one yet.

Lowry helped blow the game open in his Philadelphia homecoming. Lowry made a 3-pointer in the fourth that stretched the lead to 99-80 and earned some applause for the All-Star raised in the area.

DeRozan and Lowry helped squash the Sixers' modest two-game winning streak. Long one of the NBA's worst teams, the Sixers haven't won three straight games since they took four in a row from Dec. 29, 2013-Jan. 4, 2014.

Robert Covington led the Sixers with 26 points and Okafor had 17.

The Sixers had won two straight on the road and seemed like they could win a rare game at home when they opened with a strong first 17 minutes. Lowry brought the Sixers crashing back to reality.

Lowry buried two quick 3-pointers that brought the Raptors within two and scored on a driving layup that tied the game at 45-all. The Raptors turned a three-point deficit to open the second quarter into a 60-54 halftime lead. The Sixers went on a mini-run late in the fourth and got within five points with 30 seconds left. They could have used another 30 minutes to top the Atlantic Division-leading Raptors.

Lowry dedicated the win to his mother on her birthday .

"I got as many points as her age," he said, laughing.

Raptors: Lowry and DeRozan attended No. 1 Villanova's game on Tuesday night. Lowry, a Philly native who played at Villanova, wore a "Just a Kid From North Philly" sweatshirt at shootaround. "He's a pain in the butt sometimes, but he's our pain in the butt," Raptors coach Dwane Casey said. Casey said Lowry reminded him of former Seattle great Gary Payton.

76ers: Okafor started at centre and Joel Embiid at power forward for the first time this season. They played the first 6 minutes of the first quarter together. Embiid and Okafor are natural centres. Coach Brett Brown decided the time was right to pair them and see what they could do together in the frontcourt. "It's my job to grow our program, grow our guys, and see what we actually have," Brown said. "We have really yet to see Jahlil and Joel together in any significant timeframe. Tonight, it's available. So I'm going to do it." Embiid twisted his left ankle in warmups and sat out a stretch in the first half with a bloody nose and scored nine points.

DID YOU SEE THAT!?

Embiid's lone block in the first half came when he charged at DeMarre Carroll and used his outstretched right hand to swat the ball away.

DeRozan had the dunk of the night when he split defenders down the lane and stuffed one over Okafor.

No. 1 overall pick Ben Simmons ditched the walking boot and sat in sneakers on the Sixers bench for the first time this season. Simmons has not played this season because of a broken bone in his right foot suffered during training camp. Simmons shot free throws in practice this week. The Sixers say there is no timetable for his return.