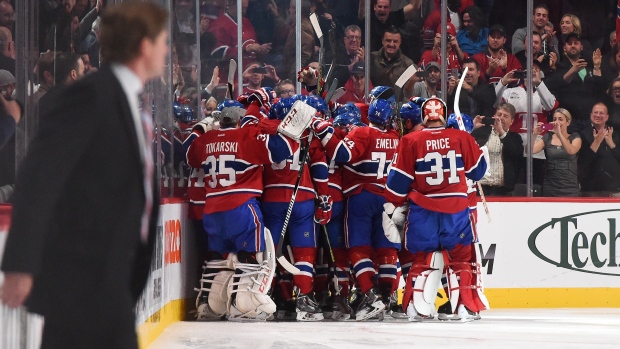 MONTREAL - Alex Galchenyuk is showing that he wants to establish himself as a top offensive player for the Montreal Canadiens.

The gifted 20-year-old scored the tying goal with 3:09 left in regulation time and David Desharnais got the game-winner in overtime as the Canadiens downed the Detroit Red Wings 2-1 on Tuesday night.

The goal was Galchenyuk's third of the season and gave him seven points in as many games for Montreal (6-1-1), which has won three home games in a row.

The American-born forward had a running physical battle with Detroit defenceman Kyle Quincey for two periods before potting his goal. In his first two NHL seasons, he might have backed away from such encounters, but not any more.

"I had a great summer of training," said Galchenyuk, who was picked third overall in the 2012 draft for his speed and playmaking skills. "I got stronger and I feel more confident physically.

"You want to start the year feeling comfortable with yourself because like that you can do more things on the ice. Physicality is not an issue for me right now."

Henrik Zetterberg, with an assist from Pavel Datsyuk, scored in the second frame for Detroit (3-1-2).

He tied the game with each team down a man when he came out from behind the net and stuffed the rubber inside the post past Jimmy Howard, who appeared to lose sight of the puck.

Only 56 seconds into overtime, Desharnais poked the puck in from the side of the net after blasts from Max Pacioretty and P.K. Subban didn't get through.

Both Howard and Montreal's Carey Price shone in a tight checking game in which Montreal outshot the Red Wings 36-28. Detroit looked to be the better team for two periods, smothering the Canadiens in the neutral zone before going on attack.

But Montreal had a 13-5 shot advantage in the third and it seemed only a matter of time before the equalizer would come.

"Their back end really got active," Detroit coach Mike Babcock said of the Canadiens. "And Carey price plays the puck really well and that helped them a lot.

"We're a quick team, but in the last 10 minutes, we were hanging on instead of pushing."

Babcock was also concerned with his power play, which went 0 for 3 and is 2 for 23 on the season.

"We've got to get our power play fixed," he said.

It was the fifth time the Canadiens have overcome an early deficit to win this season.

"We're just relentless," said Price. "That pretty much sums it up.

"We don't feel we're out of any hockey game, so we just keep working and coming at you. We feel if we do that it will pay off."

Datsyuk returned from a shoulder injury to play his first game of the season. He got 18:05 of ice time and one shot on goal.

But he was involved in the Zetterberg goal. The three-time Selke Trophy winner picked himself up after being knocked down at centre ice and got the puck to the Swede on the right side.

Zetterberg broke in, cut to the left and saw his low shot go off goalie Price, the crossbar and defenceman Subban and go into the net at 13:41 of the second frame.

And the 36-year-old Datsyuk showed he still has some magic when the Red Wings had one called back 11:51 into the third.

The Russian was on a two on one break when he spun in the slot and put the puck in the top corner with a backhander, but the spectacular goal was waived off because Justin Abdelkader had bumped Price in his crease.

Babcock said Price initiated the contact with Abdelkader and the goal should have counted, but Price saw it differently.

"Datsyuk made a great move coming into the middle and Abdelkader was just going to the front of the net," said Price. "He stopped at the top of the crease and bumped into me.

"I couldn't see anything. He turned me sideways a bit and I didn't even see Datsyuk shoot the puck. It's the referee's discretion, and I'm definitely not going to argue with him."

Notes — The Canadiens scratched rookie Jiri Sekac and put Dale Weise back in after a two-game rest. Nathan Beaulieu and Mikael Bournival also sat. . . Dan Cleary and Brian Lashoff were Detroit's scratches. . . Niklas Kronwall played his 600th NHL game. . . Detroit has not won in regulation time in Montreal since Dec. 4, 2007.