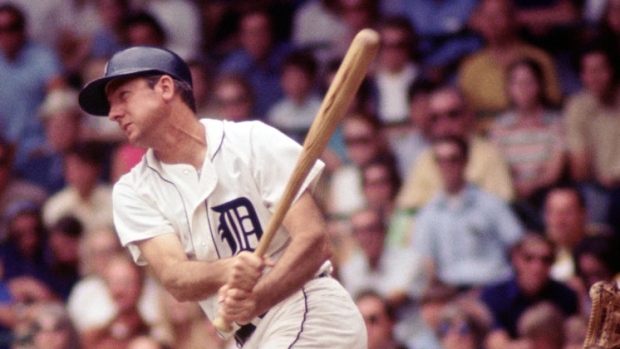 DETROIT — Fresh off the train and only 18 years old, Al Kaline ran into an immediate roadblock trying to join the Detroit Tigers. Called up to the majors, he couldn't get past the security guards at Briggs Stadium.

“I finally convinced them I was the guy who just signed a bonus contract for the enormous sum of $15,000. That was a lot back then,” Kaline recalled in a 1999 documentary.

His anonymity was short-lived.

Kaline, the Hall of Fame outfielder who played his entire 22-season career for Detroit, died Monday at his home in Michigan. “Mr. Tiger” — as he was affectionately known — was 85.

John Morad, a friend of Kaline’s, confirmed his death, and the Tigers did so as well in a statement. No cause of death was given.

Kaline was the youngest player to win the American League batting title, in 1955 at age 20 with a .340 average. He was an All-Star in 15 seasons and won 10 Gold Gloves. The beloved No. 6 later sat behind a microphone as a Tigers broadcaster and was a special assistant to the general manager.

Kaline was elected into the Hall of Fame in 1980 in his first year of eligibility.

“There’s a reason why he was Mr. Tiger,” said Dave Dombrowski, Detroit’s team president from 2001-2015. “First-class person, he was humble, he always played hard. He’s the type of guy that everybody could latch onto.”

Houston Astros star Justin Verlander, who pitched for the Tigers from 2005-2017, tweeted his appreciation Monday.

“Such a kind and generous man who meant so much to so many,” Verlander said. “I hope you knew how much I enjoyed our conversations about baseball, life, or just giving each other a hard time. I am honoured to have been able to call you my friend for all these years.”

Kaline came straight out of Baltimore’s Southern High School to the majors, making his debut on June 25, 1953. He took over as Detroit’s everyday right fielder in 1954, and quickly became a fan favourite at Briggs Stadium, later renamed Tiger Stadium.

Kaline never hit 30 home runs in a season and topped the 100-RBI mark only three times, but his overall consistency at the plate and his exceptional fielding and throwing put him among the top AL outfielders.

“There have been a lot of great defensive players. The fella who could do everything is Al Kaline,” Baltimore Orioles Hall of Famer Brooks Robinson once said. “He was just the epitome of what a great outfielder is all about — great speed, catches the ball and throws the ball well.”

In his only World Series, Kaline hit .379 with two home runs and eight RBIs as the Tigers overcame a 3-1 deficit to beat St. Louis for the 1968 championship.

“If there is one accomplishment for which I am particularly proud it is that I’ve always served baseball to the best of my ability,” Kaline said during his Hall of Fame induction speech. “Never have I deliberately done anything to discredit the game, the Tigers or my family.

“By far, being inducted into the Hall of Fame is the proudest moment of my life. You can be sure that I will make every effort to live up to the obligation associated with this honour," he said.

That same year, his No. 6 became the first uniform number retired by the Tigers.

“Many of us who are fortunate enough to work in baseball have our short lists of the players who mean the most to us. Al Kaline was one of those players for me and countless others, making this a very sad day for our sport," Commissioner Rob Manfred said.

Kaline and Willie Horton — another beloved ex-Tiger — were named in 2001 as members of the new Tigers Baseball Committee, joining team owner and president Mike Ilitch, general manager Randy Smith and manager Phil Garner. Ilitch disbanded the committee at the end of that season, but both Kaline and Horton remained as special assistants to Dombrowski after his arrival.

Jim Leyland managed the Tigers for much of Dombrowski's tenure, but Leyland also spent time in the Detroit organization as a minor leaguer in the 1960s and had known Kaline since then.

Leyland had his own name for Kaline: “I always called him Mr. Gentleman.”

Major League Baseball presented Kaline in 1973 with the Roberto Clemente Award honouring the player who best exemplifies sportsmanship, community involvement and contribution to his team.

“Today we lost one of our treasures. Al Kaline was an icon, not only to the Tigers organization, but to all of baseball. Mr. Tiger was not just a great player, but was also a classy person who I held in high esteem," Trammell said in a statement released by the Hall.

Said Morris: “If you were a Tiger, you followed his lead. Whether he was a player or broadcaster, he was around the field, around the clubhouse, and available to have a conversation if you needed some advice. That’s what the Tigers players cherished.”

The Tigers’ spring training complex in Lakeland, Florida, is on Al Kaline Drive.

Larry Herndon was a Tigers outfielder from 1982-88, when Kaline would work with the big leaguers as a spring training instructor.

“He was a golden person, along with being a great ballplayer. Gentle, kind, giving,” Herndon said. “Every good thing you ever heard about Al Kaline, it’s all true.”