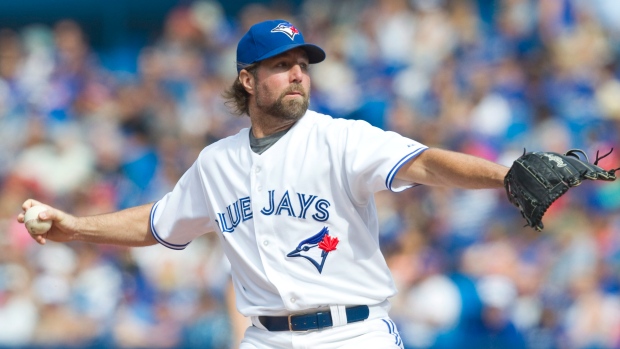 TORONTO - Blue Jays bats finished the season on a silent note Sunday as the playoff-bound Baltimore Orioles defeated Toronto 1-0 on the strength of a Jonathan Schoop home run.

Miguel Gonzalez (10-9) and five other pitchers blanked Toronto on six hits as Baltimore (96-66) heads into the post-season on a winning note. The Orioles, who will face the Detroit Tigers next, had lost their last three and six of their last nine.

Schoop's fifth-inning homer, off Toronto starter R.A. Dickey, was his 16th of the season.

Toronto (83-79) had won the first two games of the series and came into Sunday having won six of its last eight.

The Jays end the year having held their opponents to three earned runs or less in eight of their last 10 games. But the Toronto offence fizzled in the finale.

"We're all disappointed in the way it ended up, but there's some guys out there that had good years," said Jays manager John Gibbons. "We played some good ball along the way, we just didn't play good enough."

Dickey (14-13) hadn't lost in his seven previous starts, going 5-0 with a 3.15 ERA over that span. Sunday marked the 19th time he has pitched at least six innings while holding opponents to two earned runs or less, including eight of his last 10 starts.

"I felt like I pitched well enough to win," he said. "It certainly has won enough in the past. You can't always control the win and loss column and so for a pitcher, sometimes you evaluate yourself on different metrics.

"For me, giving up two hits to that lineup, I'm satisfied. Now I made a mistake to Schoop and he was the difference in the game today. Outside of that one pitch, I felt like I did pretty good managing a lineup that's probably going to be their lineup the first day that they play in the playoffs.

"They're a good team, a really good team. They won the division for a reason. And to have a performance like that at the end of the year, when it's very easy to cash it in, I was happy I was able to fight through that."

The game was played before a sellout crowd of 45,901 with the roof open under sunshine, with a 20-degree day making the winter headgear giveaway far from needed.

Toronto outhit Baltimore six to five and got the tying run on base in the bottom of the ninth when Edwin Encarnacion led off with a single off Baltimore closer Zach Britton. But pinch-hitter Danny Valencia lined out to Steve Pearce, who doubled up pinch runner Juan Francisco off first after his acrobatic catch. Dalton Pompey then struck out.

Dickey and Gonzalez offered little in the early going and what scraps were left on the table were squandered by both teams.

Gonzalez gave up five hits in five scoreless innings, striking out two and walking none. He threw 62 pitches, 45 for strikes.

Dickey exited after six innings, giving up one run on two hits with two strikeouts and three walks. He threw 82 pitches, including 46 strikes.

After giving up a single to open the game, Dickey did not yield another hit until two outs in the fifth when Schoop drove a ball over the left-centre fence for a solo shot. It was the 26th homer allowed by Dickey this season.

There had been danger signs earlier in the inning as Orioles hitters sent long balls just foul to both the left and right sides.

Toronto threatened in bottom of the fifth when Ryan Goins tripled to the right-field corner with two outs. But he was stranded there when Jose Reyes flied out.

Ubaldo Jimenez came on for Gonzalez to open the sixth as manager Buck Showalter looked to keep his starters fresh for the playoffs.

Jose Bautista made it to second via an error and stolen base with no outs in the sixth before Jimenez struck out Encarnacion, Adam Lind and Pompey.

The crowd gave Janssen a nice ovation after his 1-2-3 inning in the ninth, knowing the closer is probably moving on next season.

"I appreciate everything they gave to me," said the 33-year-old right-hander, who made his Toronto debut in 2006.

"I enjoyed my time here, if it is coming to an end," he added. "I was grateful for the opportunity I got."

The Orioles rolled out Andrew Miller and Tommy Hunter in the seventh, Darren O'Day in the eighth and Britton, who earned his 37th save, in the ninth.

Inside the Toronto clubhouse prior to the game, there was a "last day of school" feeling as players dumped shoes and other gear into cardboard boxes.

Pitcher Todd Redmond, talking a break from a card game, captured the tone by playing Green Day's "Wake Me Up When September Ends" on the locker-room sound system via his iPod. Semisonic's "Closing Time" played in the locker-room as reporters gathered in Gibbons' nearby office for his final pre-game session of the season.

For the Orioles, the season continues.

"it's a good way to end the season, end on a positive note going into the post-season," said outfielder Nick Markakis. "We'll rest up for three days. It's go time now."